The structure of DNA is a double helix, whereas RNA is a single helix. Their function and bases also differ from each other.

Deoxyribonucleic acid (DNA) and ribonucleic acid (RNA) are nucleic acids that contain genetic information and are read by cells to produce the RNA and proteins that allow living organisms to operate. This genetic information is duplicated and passed on to the next generation thanks to the well-known structure of the DNA, which is a double helix. DNA and RNA nucleotide comprises three components: a nitrogenous base, a pentose sugar, and one or more phosphate groups.

DNA (Deoxyribonucleic acid) is the nucleic acid in cells that serves as the original template for protein creation. Deoxyribose, phosphates, and a unique sequence of nitrogenous bases adenine (A), guanine (G), cytosine (C), and thymine (T) make up DNA (T). 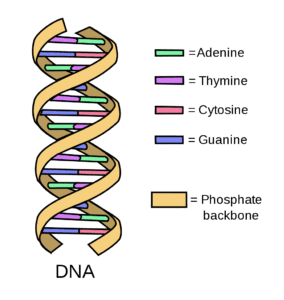 Brief insight into the structure and composition of DNA

RNA (ribonucleic acid) is a nucleic acid that has a direct role in protein production. Ribonucleic acid is an important nucleotide found in all living cells, with long nucleic acid strands. Its primary function is to act as a messenger, carrying DNA instructions for directing protein synthesis. 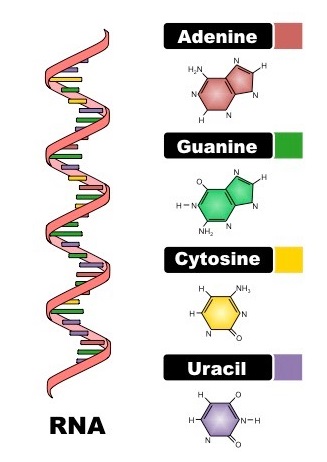 Differences Between DNA and RNA

Following are the important differences between DNA and RNA: 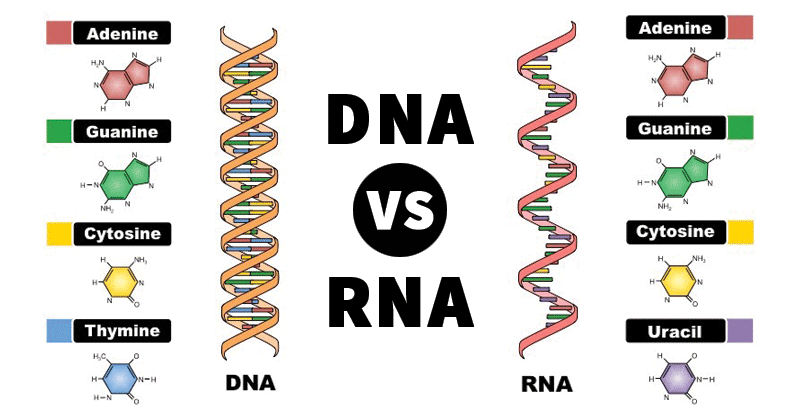 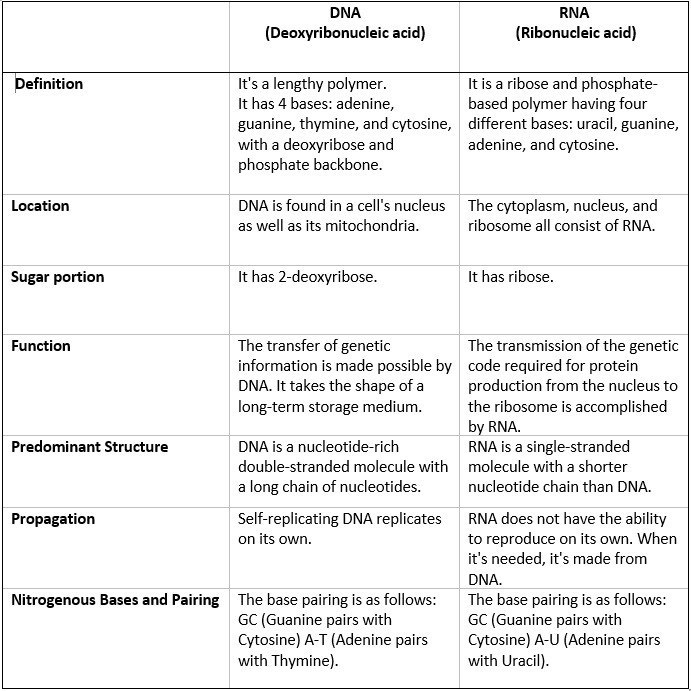 1. What are the 4 main differences between DNA and RNA?

2. What is the difference between DNA and RNA?

(a) RNA has the sugar ribose, whereas DNA has the slightly different sugar deoxyribose (a kind of ribose that lacks one oxygen atom)

(b) RNA has the nucleobase uracil, whereas DNA has thymine

3. What is the structure of RNA?

RNA is normally a single-stranded molecule, unlike DNA. In addition, RNA's sugar is ribose rather than deoxyribose (ribose has one additional hydroxyl group on the second carbon), which explains the molecule's name. Cytosine, Adenine, uracil, and guanine are the four nitrogenous bases found in RNA.

4. How are RNA and DNA similar?

RNA vs. DNA are nucleic acids made up of nitrogen-containing bases linked by a sugar-phosphate backbone. Thymine is found in DNA, while Uracil is found in RNA. Instead of the deoxyribose found in DNA, RNA nucleotides contain sugar ribose.

RNA begins its life in the nucleolus and subsequently goes to specialized cytoplasmic areas, depending on the RNA produced.

We hope you enjoyed studying this lesson and learned something cool about DNA and RNA Structure! Join our Discord community to get any questions you may have answered and to engage with other students just like you! Don't forget to download our App to experience our fun, VR classrooms - we promise, it makes studying much more fun! 😎