The Chromosomal Theory of inheritance, proposed by Sutton and Boveri, states that chromosomes are the genetic material responsible for Mendelian inheritance.

Chromosomes are a thread-like structure made up of nucleic acids and proteins found within the nucleus of live cells. They are primarily responsible for conveying genetic information in the form of genes.

Mendelian inheritance refers to the kind of inheritance that follows the laws of segregation and independent assortment. It follows this pattern where a gene inherited from either parent segregates into gametes at an equal frequency.

The chromosomal theory of inheritance 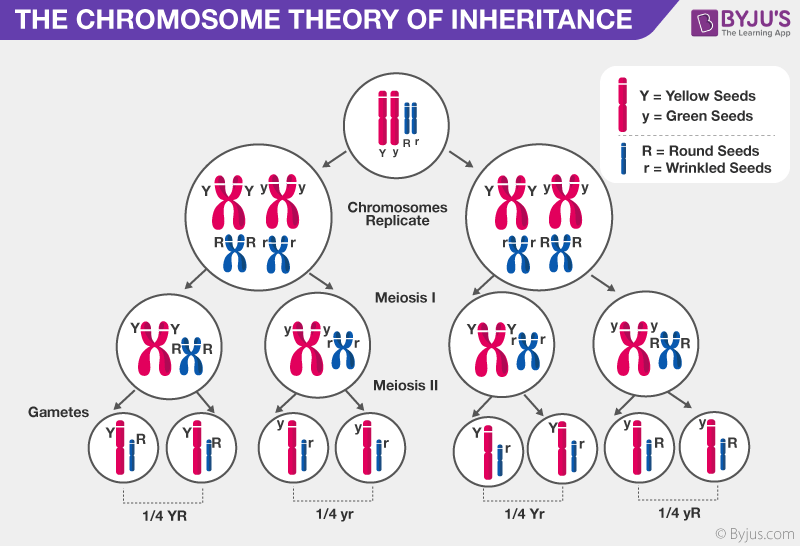 Observations of Chromosomal theory of Inheritance

The Chromosomal Theory of Inheritance supports Mendel's rules. The following are the findings of this theory:

Phenotypic variance is affected by genetic disease and genetic variation:

A deviation in part or entirely from the usual DNA sequence can cause a medical condition called a genetic disorder.

These are the types of genetic disorders:

1. Single-gene disorders, where a mutation affects one gene:

A. Sickle cell anemia is an example and affects hemoglobin. The body produces abnormally shaped red blood cells that have a crescent or sickle shape which leads to anemia. The sickle cells also get stuck in blood vessels, blocking blood flow.

Sickle cell anemia is inherited in an autosomal recessive pattern, which means that both copies of the gene (from the mother and father) in each cell have mutations (disease-causing alleles). A person who carries one copy of the mutated gene is said to be a carrier for the condition. In an autosomal disorder both males and females can be carriers. Here both the mother and father are heterozygous for the disease. 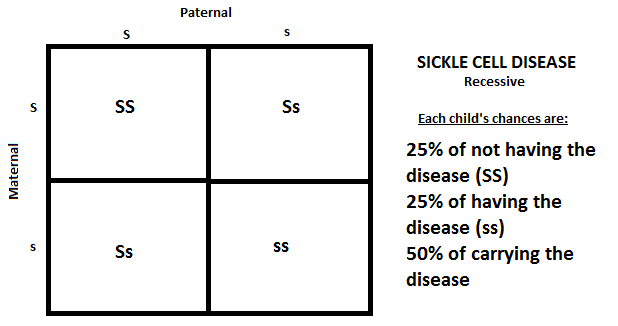 B. Huntington disease (HD) is a condition that causes progressive degeneration of neurons in the brain and is inherited in an autosomal dominant pattern. A mutation in even one (dominant allele) of the two copies leads to disease symptoms. The mother here is heterozygous (affected) for the disease and the father is homozygous recessive (normal). 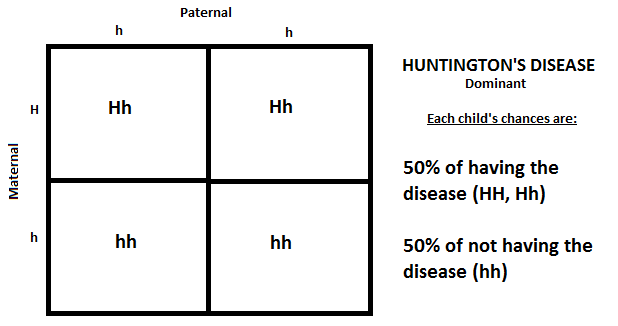 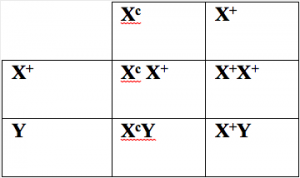 2. Chromosomal disorders, where chromosomes (or parts of chromosomes) are missing or changed.

A. Meiosis occurs during gamete production,with the creation of four daughter cells, with a haploid complement of chromosomes in each gamete. Nondisjunction occurs when a pair of homologous chromosomes has failed to separate or segregate at anaphase so that both chromosomes of the pair pass to the same daughter cell. This results in aneuploidy: when the total number of chromosomes in a cell is not an exact multiple of the haploid number. 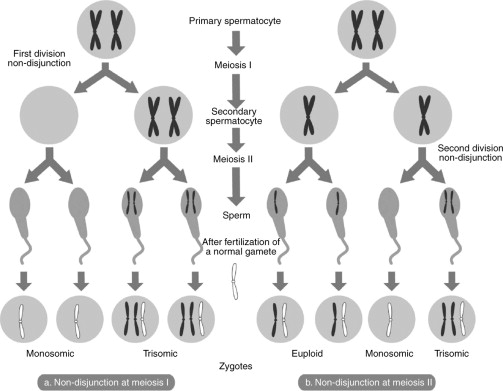 B. Trisomy is the most common aneuploidy. Down syndrome is also referred to as Trisomy 21 and is a chromosomal disorder. Down syndrome is a condition in which a person has an extra copy of chromosome 21. This syndrome leads to lifelong intellectual disability and developmental delays and causes learning disabilities in children. Medical abnormalities including heart and gastrointestinal disorders are also observed. 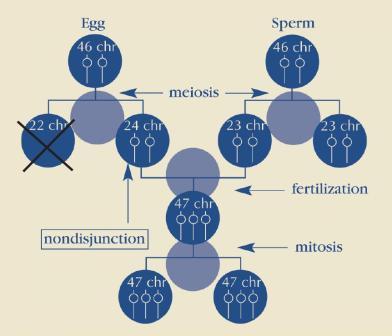 1. How does meiosis lead to genetic diversity?

Meiosis, in particular, develops novel genetic material combinations in each of the four daughter cells. The exchange of DNA between paired chromosomes creates these novel combinations. As a result of this exchange, the gametes generated during meiosis have a wide range of genetic diversity.

2. Why is meiosis important in maintaining genetic diversity?

Meiosis is crucial for three reasons: it permits diploid creatures to reproduce sexually, allows for genetic variation, and assists in the repair of genetic abnormalities.

Meiosis creates genetic variety by allowing novel combinations of variants to develop in the gene pool through a process known as crossing over. Homozygous chromosomes come together during the prophase of meiosis I and exchange genetic material.

5. What are 3 reasons to explain genetic variations in meiosis?

The following are the three major sources of genetic diversity resulting from sexual reproduction: Crossing the border (in prophase I) Chromosomes are arranged in a random order (in metaphase I) Fusion of gametes from various parents at random.

6. Which of the following generates genetic diversity?

Mutation (which can produce whole new alleles in a population), random mating, random fertilization, and recombination between homologous chromosomes during meiosis (which reshuffles alleles within an organism's progeny) all contribute to genetic variation.

7. How does meiosis contribute to genetic variation while mitosis does not?

Examine how meiosis, but not mitosis, contributes to genetic variation. The independent arrangement of the pairs of chromosomes and crossing over during meiosis offer a significant degree of genetic variation. Mitosis results in the formation of identical cells.

8. Why does meiosis result in greater genetic diversity than mitosis?

We hope you enjoyed studying this lesson and learned something cool about Chromosomal Inheritance! Join our Discord community to get any questions you may have answered and to engage with other students just like you! Don't forget to download our App to experience our fun, VR classrooms - we promise, it makes studying much more fun! 😎