Big Picture: Meiosis is a type of cell division that reduces the no. of chromosomes in a cell by half, and gives rise to 4 haploid cells.... and we get it, trying to understand the process of meiosis can sometimes feel like a giant math problem. Hang in there though - this guide breaks it down for you!

Reproduction is a process by which organisms produce offspring or replicate themselves, and occurs in the following ways: 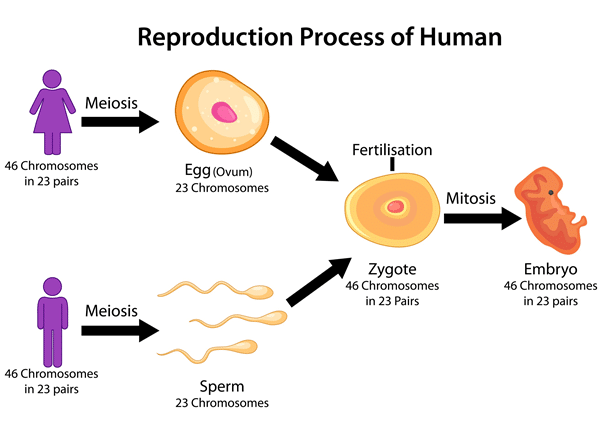 Haploid cells/ gametes that are part of the sexual reproductive cycle are produced by a cell division called meiosis. Meiosis I begins after DNA replicates during the interphase of the cell cycle. The resulting daughter cells each have a random combination of chromosomes - one from each homologous pair. Let's look at what happens in the each stage of Meiosis I.

The daughter cells from Meiosis I go on to Meiosis II, which occurs in 4 phases - this time without the replication of DNA! This part of meiosis results in the halving of the chromosomes and gives rise to 4 haploid cells. Meiosis is a process where a single parent cell is divided into four daughter cells containing half of the original genetic material, i.e., the DNA.

2. What is the simple definition of meiosis?

Meiosis can be defined as cell division from a parent cell to form four cells in two stages. These cells contain half of the genetic materials.

3. What is the difference between meiosis and mitosis?

The nine stages of meiosis are:

5. What happens during pachytene?

In pachytene, each quadruple thickens, shortens, and is separated into four individual chromatids joined at the centromere. It is also the stage where homologous recombination occurs — for example, the chromosomal crossover between two non-sister chromatids.

🤫 Pro Tip: Inspirit's 3D models (check out our rooms!), diagrams, and pictures can be super helpful to remember and visualise the events that occur in mitotic and meiotic division. Remember to study those!

We hope you enjoyed studying this lesson and learned something cool about Meiosis! Join our Discord community to get any questions you may have answered and to engage with other students just like you! Don't forget to download our App to experience our fun, VR classrooms - we promise, it makes studying much more fun! 😎