In this guide, we'll understand what energy is and why cells need energy to survive, grow, and reproduce. We'll also learn about how the laws of thermodynamics apply to tbiological systems.

Energy is often defined as the ability to do work and it manifests itself in several forms. Cells need energy to develop, degrade, and release a wide variety of substances. Mitochondria convert the food we eat and the air we breathe into “ATP”, a special type of fuel that powers our cells, and in turn, us. The first and second laws of thermodynamics govern the energy transfers within the food chain.

1. Which compound directly provides energy for cellular work? / What do all cellular activities in living organisms use as a source of energy?

Breaking down of Glucose: Cellular respiration

Most cells, including the ones in the human body, get energy from glucose (C6H12O6) by a process called cellular respiration. In this process, a glucose molecule is broken down, and the reaction for this is as follows:

Breaking down glucose releases energy that is captured by the cell in the form of adenosine triphosphate, or ATP. ATP is a small molecule that supplies energy for all cellular activities, and it is used as an energy source by other reactions in the cell. Hence, ATP is generally referred to as the "energy currency" of the cell.

Sugars like glucose are made by plants through a process called photosynthesis. During photosynthesis, plants use the energy of sunlight to convert carbon dioxide gas into sugar molecules. The overall reaction of photosynthesis is just the cellular respiration reaction flipped backward:

Also, plants need the energy to power their cellular processes, so some amount of the sugars are used by the plant itself. They can also provide a food source for animals that eat the plants. In both cases, cellular respiration breaks down the glucose, generating ATP required to keep cells running.

Metabolic pathways are a series of interconnected biochemical reactions that convert a substrate molecule(s) through a series of metabolic intermediates to yield a final product eventually.

Examples of metabolic pathways include both making and breaking down glucose molecules.

Thermodynamics in biology refers to the study of energy transfers that occur in molecules or collections of molecules. When we are discussing thermodynamics, the particular matter or collection of items that we're interested in is called the system. In contrast, everything that's not included in the system we've defined is called the surroundings.

For instance, consider heating a pot of water on the stove. Here, the system might include the stove, pot, and water, while the surroundings would be everything else: the kitchen, house, etc.

Systems in thermodynamics can be divided into three types: open, closed, and isolated:

The First Law of Thermodynamics

The First Law of Thermodynamics states that energy cannot be created or destroyed. It can only change the form or be transferred from one object to another.

Transfers and transformations of energy occur around us all the time. For instance, plants convert sunlight (radiant energy) into chemical energy stored in organic molecules. Humans transform chemical energy from food into kinetic energy to walk, breathe, and perform other activities.

But, none of these transfers is completely efficient. Some amount of the initial energy is released as thermal energy. When it's moving from one object to another, thermal energy is called by the more familiar name of heat. It's obvious that glowing light bulbs generate heat in addition to light, but moving pool balls do too (thanks to friction), as do the inefficient chemical energy transfers of plant and animal metabolism.

Entropy and the Second Law of Thermodynamics

The degree of randomness or disorder in a system is called its entropy. Every energy transfer ends up in the conversion of some energy to an unusable form (such as heat). The heat that does not do work, increases the randomness of the universe. Hence, as per the second law - every energy transfer that takes place will increase the entropy of the universe and reduce the amount of usable energy available to do work. To put in other words, a chemical reaction or set of connected reactions, will proceed in a direction that increases the overall entropy of the universe.

The energy released by hydrolysis (breakdown) of ATP is used to power many energy-requiring cellular reactions. 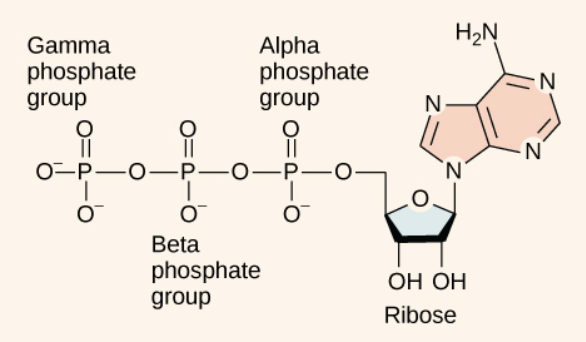 The bonds between the phosphate groups are called phosphoanhydride bonds, and these are generally referred to as "high-energy" bonds.

The phosphoanhydride bonds are considered high-energy because an appreciable amount of energy is released when one of these bonds is broken in a hydrolysis (water-mediated breakdown) reaction. ATP is hydrolyzed to ADP in the following reaction:

The hydrolysis of ATP to ADP is reversible. The reverse reaction, which regenerates ATP from ADP and Pi, requires energy. Regeneration of ATP is important because cells tend to use up (hydrolyze) ATP molecules very quickly and rely on replacement ATP being constantly produced.

The ATP regeneration reaction is just the reverse of the hydrolysis reaction:

2. How does ATP supply energy for cellular activities? / How is the energy released by ATP hydrolysis used to power other reactions in a cell? 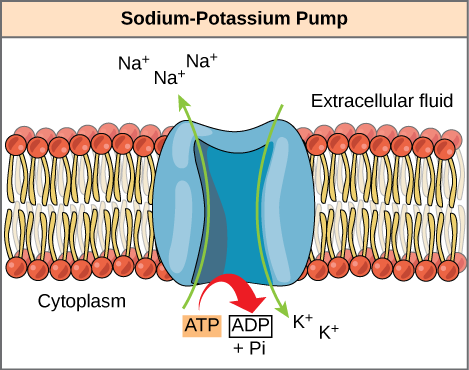 Adenosine triphosphate (ATP) directly provides energy for cellular work and is generally referred to as the "energy currency" of the cell.

2. How do cells capture the energy released by cellular respiration?

The energy released by cellular respiration is captured by the formation of adenosine triphosphate (ATP) within the cell.

3. What is cellular energy?

Every function of the body requires energy. Inside each cell, there are energy-producing power plants called “mitochondria”, which converts the food consumed and the inhaled air into “ATP”, where energy is stored. Cells then use these energy-carrying ATP molecules to fuel their functions. Cellular energy is the energy from organic molecules (sugars, fats, and amino acids), that is converted into a usable form (ATP).

4. What type of reaction is cellular respiration?

5. What are the electron carriers used in cellular respiration?

There are two types of electron carriers that are essential in cellular respiration: NAD+ is the primary electron carrier, while FAD participates in just one or two reactions.

We hope you enjoyed studying this lesson and learned something cool about Cellular Energy! Join our Discord community to get any questions you may have answered and to engage with other students just like you! Don't forget to download our App to experience our fun VR classrooms - we promise, it makes studying much more fun 😎