breathing and exchange of gases ncert

breathing and exchange of gases pdf

The absorption of O2 from blood and release of CO2 from tissue cells is known as Breathing. The gas exchange allows the body to replenish oxygen while expelling carbon dioxide. Both are essential for existence.

• Diffusion of oxygen and carbon dioxide across the alveolar membrane.

• Transport of gasses by the blood.

• Diffusion of O2 and CO2 occurring in blood and tissues.

• Utilization of oxygen by the cells for catabolic reactions and release of carbon dioxide.

There are two processes of Breathing - Inspiration and Expiration.

• Process of taking atmospheric air in is known as inspiration.

• It is an active process.

• Pressure inside the lungs is less than atmospheric pressure.

• External intercostal muscles contract, which raises the ribs to increase the volume of the thoracic cavity.

• Process of giving out carbon dioxide is known as expiration.

• It is a passive process.

• Pressure inside the lungs is more than the atmospheric pressure.

• External intercostal muscles relax, which lowers the ribs to decrease the volume of the thoracic cavity. 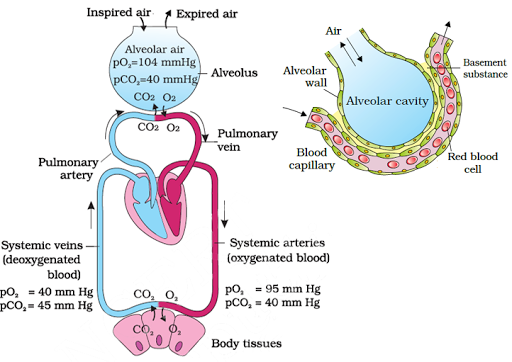 How are oxygen and carbon dioxide transported in blood?

Disorders of the Respiratory System