Plants carry a variety of chemicals such as gases, minerals, water, hormones, and organic solutes over short distances (from one cell to another) and long distances (from roots to tips of the stem) as water. This is known as transportation in plants.

Diffusion is a slow process and is not dependent on energy sources.

Rate of diffusion is determined by :

Diffusion of substances majorly depends on its solubility in lipids (lipids are a major membrane component).

As expected, lipid solubility is an important advantage for substances to pass through the cell membrane.

Some carriers allow diffusion of molecules only in pairs!

Water makes up the plant cell protoplasm with dissolved molecules.

Transpiration is loss of water from the leaves through evaporation.

How do Plants Absorb Water?

The main tissue responsible for water transport in plants is the xylem.

UPTAKE AND TRANSPORT OF MINERAL NUTRIENTS

The main **tissue responsible for food (sucrose) transport/translocation in higher plants is the phloem. 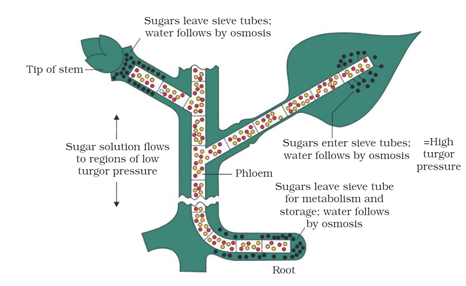