Animals are classified in order, species, and genus based on various characteristics in the animal kingdom in biology. Unlike plant cells, animal cells do not have cell walls.

In the kingdom Animalia, species are sorted into thirty-three different phyla. Phyla are further divided into classes, then orders, then families, and so on. Let’s talk about the ten most well-known of these groupings, starting with the phylum Porifera, otherwise known as sponges. 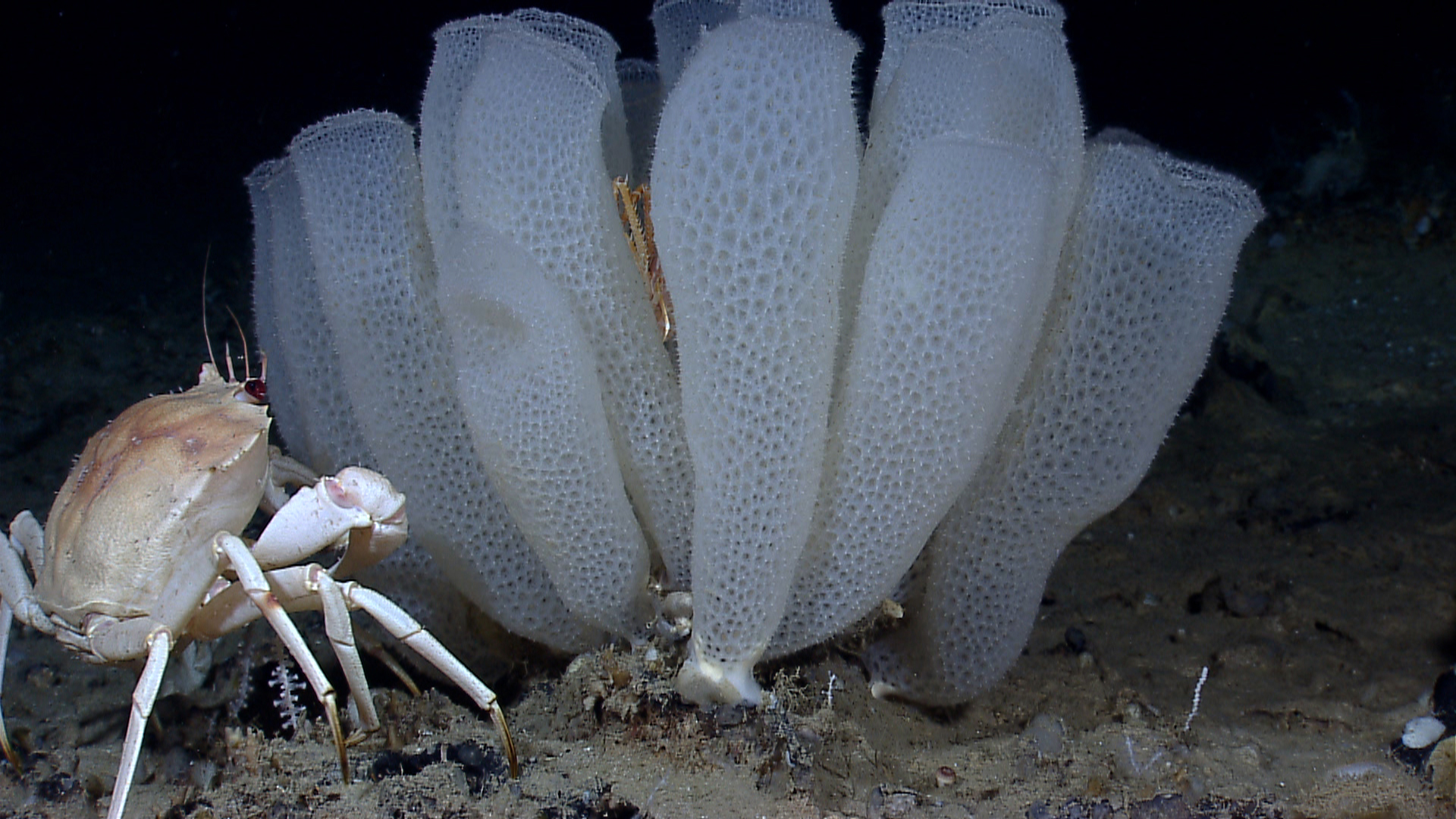 In the image above, we see a Venus’ flower basket, or Euplectella aspergillum. Despite its plant-like appearance (and name), the flower basket is, in fact, an animal. Euplectella aspergillum is a type of glass sponge belonging to the phylum Porifera, one of the oldest animal groups known to man. Members of Porifera, colloquially known as sponges, lack both tissues and organs. Adult sponges are sessile, meaning they aren’t able to move around. To obtain sustenance, the body of the Porifera is designed in such a way that water moves through the body and filters out food and absorbs dissolved oxygen. 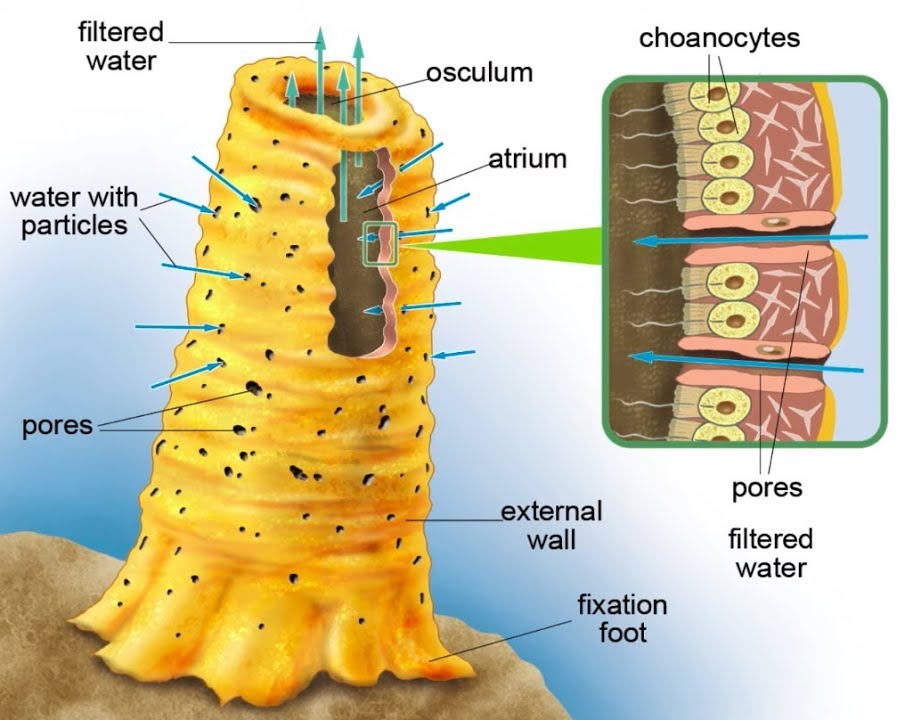 The body wall of a sponge is made up of tiny pores called ostia through which water enters the spongocoel, or central body cavity, which is lined by flagellated cells called choanocytes. Choanocytes help pump water through the sponge and absorb nutrients through the middle portion of their body called the collar. Water moves from the spongocoel to an aperture called the osculum, where it is then expelled back into the environment. Members of Porifera are hermaphrodites, meaning an individual has both male and female organs and fertilization is internal. Other examples of sponges include Spongia officinalis (bath sponge), Ircinia campana (vase sponge), and Callyspongia vaginalis (branching vase sponge, depicted below).

They are marine, or free-swimming, radially symmetrical animals. The name cnidaria is acquired from the cnidoblasts or cnidocytes. Cnidoblasts are used for protection, defense, and capture of prey. Tissue level of organization is seen, and they have a central cavity with a single opening; the mouth is present on the hypostome.

Digestion is extracellular and intracellular. Two basic body forms called polyp and medusa are exhibited by them. The polyp is cylindrical, whereas the medusa is umbrella-shaped and free-swimming. E.g., physalia, adamsia.

They are called flatworms because of their dorso-ventrally flattened body. Flatworms are bilaterally symmetrical, triploblastic, and acoelomate animals with organ level of organization. Hooks and suckers are present in parasite forms. Specialized cells called flame cells are present. These flame cells help in processes like excretion and osmoregulation. The nervous system of this phylum is ladder-like. The anus, the circulatory system, and the digestive tract are absent, but a mouth is present. Sexes are separate, and fertilization is internal. They possess high regeneration capacity. E.g. tapeworm, fasciola.

Commonly called roundworms, they have an organ-system level of organization. They are bilaterally symmetrical, triploblastic, and pseudocoelomate animals. Their alimentary canal is complete with a well-developed muscular pharynx. Sexes are separate, and females are longer than males. Fertilization is internal. E.g., Ascaris.

They exhibit an organ-system level of organization and bilateral symmetry. They are segmented metamerically and coelomate animals. Their body surface is distinguished with the help of segments or metameres. Longitudinal and circular muscles facilitate their locomotion. Annelids in the aquatic habitats possess parapodia structures, which help in swimming. There is a closed circulatory system. A structure called the Nephridia helps in osmoregulation and excretion. They reproduce sexually. E.g. nereis, hirudinaria.

Arthropoda is the largest phylum of Animalia. They have an organ-system level of organization and bilateral symmetry. The chitinous exoskeleton is surrounded throughout the body of the Arthropods. It has joint appendages, which help in locomotion. The body of the Arthropod is divided into the head, thorax, and abdomen.

The open circulatory system is present, and it has a pair of compound eyes. This phylum has a well-developed digestive system. They respire through their body surface and excrete through the antennal glands. Fertilization is either external or internal, and their development is indirect. E.g., apis, bombyx.

Phylum Mollusca is generally found in marine and freshwater habitats. They exhibit the organ-system level of organization. The body is divided into head, visceral mass, foot, and mantle. The head comprises tentacles and has compound eyes. The foot is muscular and helps in locomotion.

The body of a Mollusca is covered by a calcareous shell and bilaterally symmetrical. The radula is the rasping organ used for feeding. The blood circulates through the entire open circulatory system, and the nervous system is made up of nerves and paired ganglia. The sexes are separate, and fertilization may be external or internal. They are usually triploblastic and oviparous. E.g., pila, octopus. 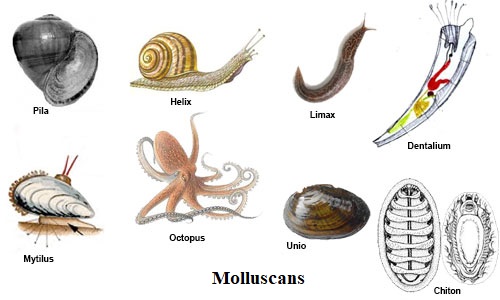 A water vascular system is present, which helps in the circulation of nutrients and the exchange of gases. Sexes are usually separate, and fertilization is external with indirect development. E.g., asterias, echinus. 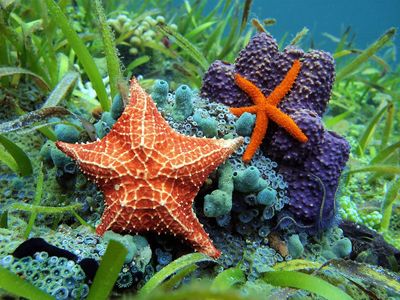