Chemical equilibrium is the condition in which the concentrations of reactants and products do not vary any more in a chemical process. The rate of forward reaction equals the rate of backward reaction at equilibrium.

Two or more chemicals combine to produce a single compound in such reactions.

These are the reactions. When a chemical decomposes, two or more distinct compounds are produced.

Food digestion is a breakdown event as well.

One element or group is displaced by another in these reactions. In actuality, these are redox reactions, such as

There are several types of equilibrium:

Effect of Change of Concentration

Effect of Change in Pressure 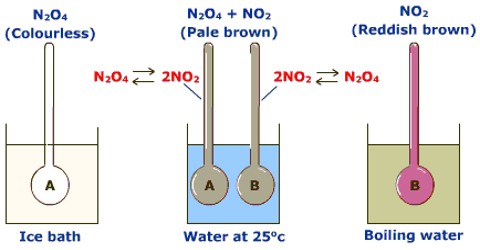 Effect of Addition of Inert Gas

(i) Under continual strain. if an inert gas is used as a filler It will boost the system's volume. As a result, the equilibrium will change in a direction where the number of moles of gases increases.

(ii) Constant-volume addition of inert gas An inert gas is introduced to maintain the volume of the system constant. The substance's relative molar concentration will not change. As a result, the reaction's equilibrium position is unaltered.

The presence of a catalyst has no effect on the equilibrium position. It just expedites the process of achieving balance.

(i) Pressure's effect on solubility: The solubility of gas will increase when pressure rises, and vice versa.

(iii) Pressure's effect on the melting point of ice:

Ice is a kind of liquid water.

Because ice has a larger volume than liquid water, greater pressure will cause ice to melt, according to the Le-Chatelier principle.