The photosynthesis process is how plant cells produce food for themselves in the presence of water and sunlight.

Photosynthesis is a process by which plants produce food using chlorophyll present in them and combine it with carbon dioxide in water and sunlight. This process is essential for plants to sustain themselves. Indirectly this process produces food for all living beings; therefore, we must understand the photosynthesis process.

The photosynthesis definition in biology explains that they occur in plants by which plants absorb light energy and then convert them into chemical energy. During this photosynthesis process, energy transforms the water, carbon dioxide, and other minerals into oxygen and other organic compounds.

There is a certain significance of photosynthesis, such as:

Phases of the photosynthesis process 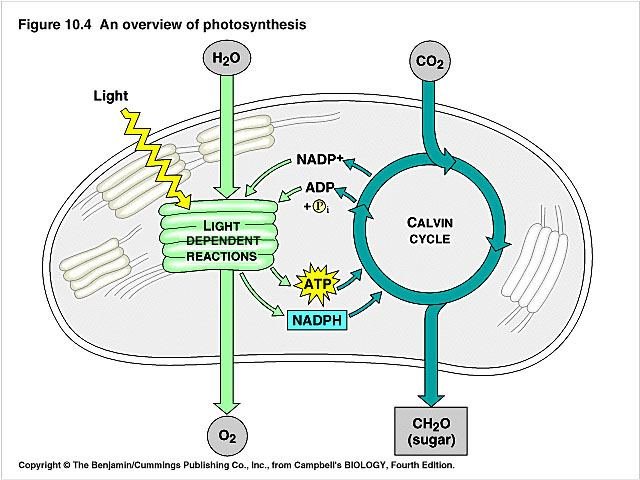 The very first step of the process of photosynthesis is the absorption of light by chlorophylls. These chlorophylls are connected with proteins in the thylakoids sack of chloroplasts. Moreover, the absorbed light converts itself into energy, and then it is used for eliminating the electrons from the water, which is an electron donor to form oxygen. Then, these eliminated electrons pass to a major electron acceptor known as Quinine.

When electrons are transferred to the final acceptor, it moves out to the stroma of the plant from the thylakoid lumen by the complex process of F0F1. This results in the production of ATP, which is the most important source of energy in a plant's biological process. This ATP production is solely utilized during synthesis and is dependent on light.

The formed NADP and ATP produce the energy. The process of reducing carbon occurs by the electrons into the six-carbon molecules. All the above three steps are known as light reactions, while this carbon fixation is light-independent, and thus, they are called dark reactions. This process is also known as the Calvin Cycle.

The process of photosynthesis is expressed in a chemical equation as

This formula of photosynthesis explains that the reactants, which are six carbon dioxide molecules and six water molecules, get converted into six molecules of oxygen and sugar molecules using the light energy captured by chlorophyll.

1. What is the step-by-step process of photosynthesis?

There are generally four steps of the photosynthesis process.

2. What are the 10 detailed steps invloved in photosynthesis?

Step 1. The first step of photosynthesis is Light-dependent. The three main components of this step are water, carbon dioxide, and sunlight. Carbon Dioxide and water enter the leaf, and the sunlight is absorbed to produce energy in the whole process.

Step 2. It is also a light-dependent process. Here, the chloroplasts of green color tend to bend towards the sunlight.

Step 3. Light independent and thus known as a light reaction. The chlorophyll inside the chloroplasts begins to absorb light.

Step 4. Light-dependent light strikes the pigment of the thylakoid membrane, where the water splits into oxygen.

Step 5. Light-dependent step and in this step oxygen gas gets released in the atmosphere.

Step 6. It depends on the light, and the enzymes get converted from ADP to ATP and NADP into NADPH whenever the sunlight hits the other pigment molecules of the thylakoid.

Step 7. In light reactions, chlorophyll turns off and releases the energy for dark reactions, ATP, and NADPH.

Step 8. Light independent step; Carbon dioxide gets attached to the rubisco, i.e., an acceptor in the chloroplast.

Step 9. This step is light-independent and known as a dark reaction; the produced energies, like ATP and NADPH, are used in the Calvin cycle to convert CO2 from the atmosphere into the six-carbon sugar glucose.

Step 10. Light independent step. In the Calvin cycle, three molecules of carbon dioxide get converted into glucose from the atmosphere, and these are stored in the plants in the form of food.

3. What happens during process of photosynthesis?

Carbon dioxide and water are converted into glucose and oxygen.

4. What is the process of photosynthesis?

Photosynthesis is the process by which plants use sunlight, carbon dioxide, and water to produce energy and oxygen in the form of sugar. This sugar is stored by plants as food or starch.

We hope you enjoyed studying this lesson and learned something cool about the Complete Process of Photosynthesis! Join our Discord community to get any questions you may have answered and to engage with other students just like you! Don't forget to download our App to experience our fun, VR classrooms - we promise, it makes studying much more fun! 😎