🗻 Big Picture: Cell division, polarity, and contraction all rely on the structure of cytoplasm and cytoskeleton, part of the cell. To get the whole picture, keep reading.

The cytoplasm consists of everything inside the cell membrane excluding the nucleus. This means that the components of the cytoplasm include everything from the mitochondria, Golgi apparatus, endoplasmic reticulum, etc to the jelly like fluid that surrounds these organelles. This entire unit is termed the cytoplasm.

The cytoskeleton provides structural support to the cell, very similarly to how the human skeleton provides the main framework for our bodies. This guide dives deeper into these two critical parts of a cell.

The Cytoplasm comprises everything else that is contained within the cell's membrane, except the nucleus. All the cellular organelles are surrounded by a watery gel-like substance known as Cytosol, which is ALSO a considered a part of the cytoplasm. Therefore, cytoplasm = cell organelles (except the nucleus) + cytosol + macromolecules/granules suspended in the cytosol!

The cytoplasm is responsible for several vital functions, one of which is maintaining cell structure. Cytoplasmic functions also include the following: 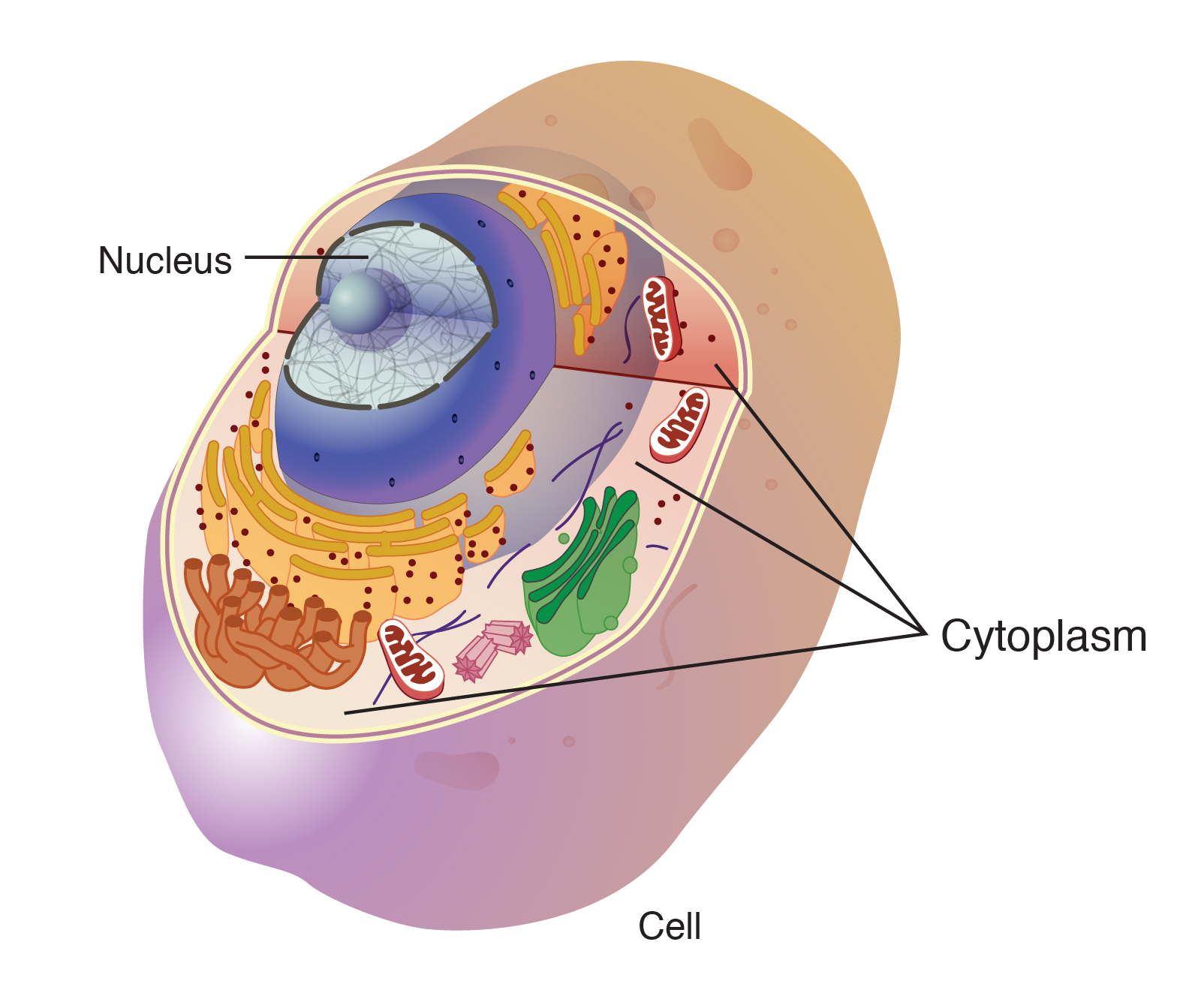 What is a cytoskeleton?

The Cytoskeleton is made up of a system of filaments that are present in the cytoplasm, and can be thought of as the 'skeleton of the cell'. The eukaryotic cytoskeleton is a network of long, thin protein fibers that contribute to the cell's structure and function in several ways. The cytoskeleton is composed of 3 types of filaments: microfilaments, microtubules, and intermediate filaments.

The cytoskeleton hase several important functions as the 'skeleton' of the cell. These include:

A Microtubule is one of the thickest structures in the cytoskeleton, and while they are fairly strong, they are not too flexible. They are made up of alpha and beta tubulin that are typically found radiating from an area near the nucleus (the centrosome). Tubulin dimers consisting of both alpha and beta types, come together to form the cylinder-like structure that is observed in the below visual.

Microfilaments are often called actin filaments since they’re primarily composed of two actin chains that are wound around each other. Microfilaments are the narrowest of the 3 filament types. Actin in microfilaments interacts with myosin to contract your muscles and both actin and myosin are found in abundance in muscle cells.

These fibres make up the nuclear envelope and hold the organs of the cell together. They also provide strength and support to the cell, and differ in structure among different cell types. Keratin is a well-known protein that makes up intermediate filaments in nails, skin, and hair.

1. What is the cytoskeleton?

The cytoskeleton comprises protein filaments and tubules positioned inside the cell's cytoplasm and provides structural support.

2. What are the functions of the cytoplasm and the cytoskeleton?

3. Is cytoplasm part of the cytoskeleton?

The cytoplasm is highly organized despite its lack of form and structure. The cytoskeleton is a protein scaffolding network that holds the cytoplasm and the cell together.

4. How does the cytoskeleton play a role in cell division?

6. Do prokaryotic cells have a cytoskeleton?

Both eukaryotes and prokaryotes have a cytoskeleton. Bacterial cytoskeletons are composed of tubulin-related proteins FtsZ and MreB/Mbl.

8. What is the cytoplasm?

The cell membrane encloses the cytoplasm, a viscous substance that fills each cell. Water, salts, and proteins make up the majority of the composition. The nucleus, endoplasmic reticulum, and mitochondria are all included inside the cytoplasm.

9. What are the functions of the cytoplasm?

The cytoplasm is a medium for chemical reactions. It serves as a platform for the cell's other organelles. A cell's cytoplasm is responsible for all expansion, growth, and replication functions.

We hope you enjoyed studying this lesson and learned something remarkable about the Cytoplasm and Cytoskeleton! Join our Discord community to get any questions you may have answered and to engage with other students just like you! Don't forget to download our App and check out our excellent VR room for this guide - we promise it makes studying much more fun 😎