What is mitosis? A cell cycle phase where the chromosome containing the nucleus divides between two cells. Therefore, two daughter cells are produced from a mother cell.

What does yeast used in bread and frogs have in common? They all grow, but how? They contain cells that divide continuously to produce new cells which would be completely genetically identical to the mother cell. This is the purpose of mitosis or the primary mechanism of growth because cells tend to generally wear out and, therefore, reproduce new ones and grow bigger.

Brilliantly, Walter Flemming was among the first cytologists to describe chromosome behavior in animal cell division and how precisely mitosis occurs.

Definition and explanation of mitosis

Mitosis is the process of cell division where one mother cell would divide to produce two daughter cells. They would be genetically identical. In this stage of cell division, the DNA would be split into two, having an equal number of chromosomes. Most of the cell division happening in your body undergoes mitosis, where it replaces the worn-out cells.

What is the goal behind this cell division? It gives rise to two daughter cells that would have full identical sets of chromosomes; otherwise, it could lead to genetic abnormalities. Cells with too many chromosomes could even lead to the growth of cancerous malignant cells. Therefore, for a healthy set of daughter cells, chromosome duplication is done in carefully organized phases of mitosis.

What is the purpose of mitosis?

The purpose of mitosis could be brought down to three main reasons: Different stages of mitosis in order

__Phases of mitosis in order __

Mitosis mainly occurs in four crucial stages known as prophase, metaphase, anaphase, and telophase. In some places, you would notice the prophase stage being divided into early prophase and prometaphase. Cytokinesis is the process of cell division to create two new cells, which happen in anaphase or telophase.

Mitosis is the process of cell division 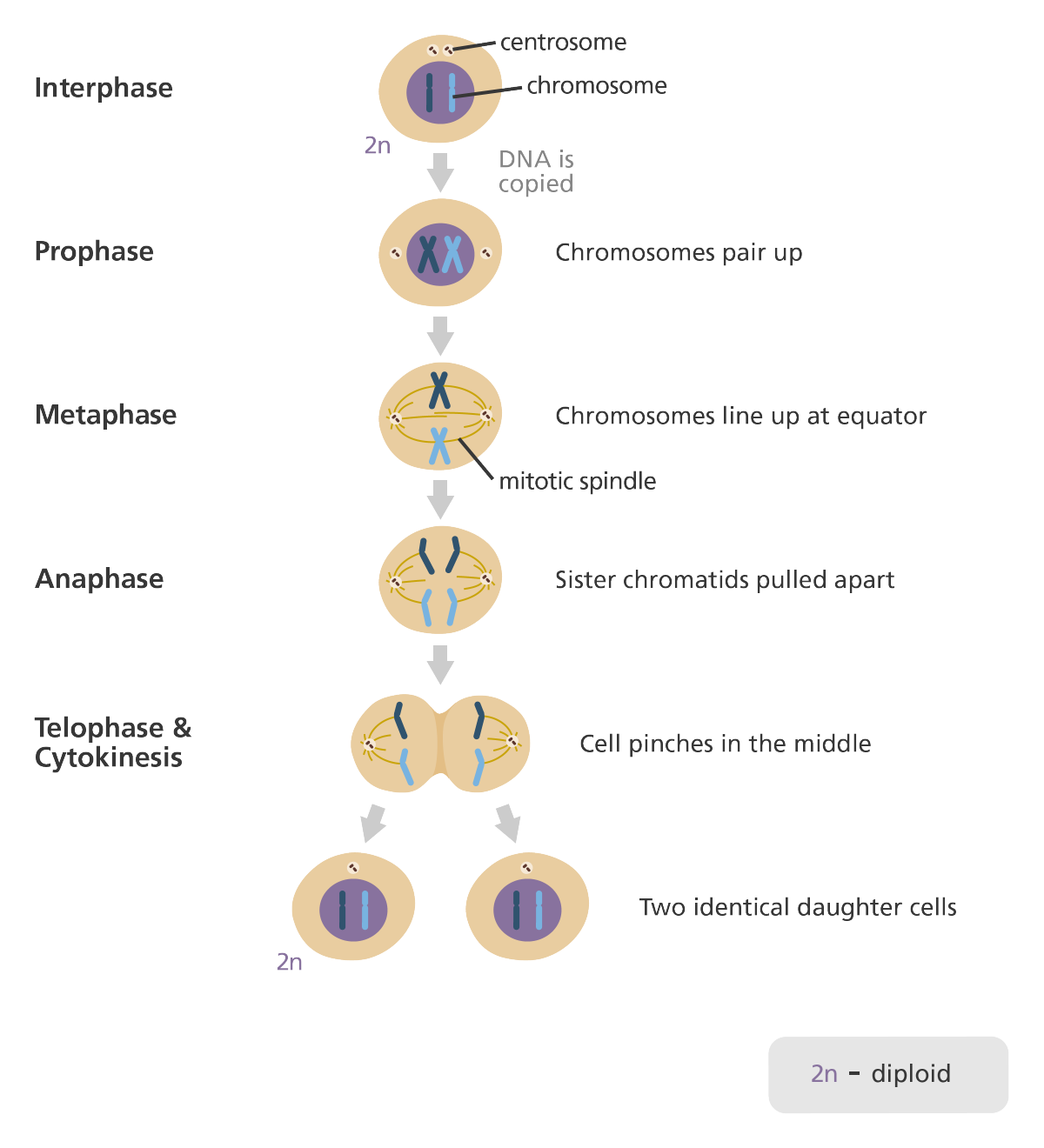 Here, the cell has already entered the interphase stage where it has copied the DNA sequence, and the nucleus now contains chromosomes with sister chromatids. The chromosomes are not always precisely visible as they are still in their decondensed form.

Before moving towards other steps of mitosis (next stage anaphase), the cell ensures that the chromosomes are precisely lined up with their kinetochores attached to the microtubules. This is termed as the spindle checkpoint to guarantee that the sister chromatids are divided evenly when in the next stage, two new daughter cells are formed.

Cytokinesis, which is the formation of two new sister cells, often overlaps with that of the final mitosis stage.

1. What is mitosis and meiosis? What are the stages of mitosis?

Mitosis is a cell division process where two new sister cells are formed from a mother cell. It consists of four main stages:

Meiosis is the process where one single cell divides twice to form four cells containing half of the genetic information.

2. What is the importance of mitosis?

Mitosis is invloved in growth and development, cell replacement, and asexual reproduction.

3. How does mitosis help growth?

It helps in dividing a single cell into two having the same genetic material to help organisms grow in size and for repairing damaged tissues.

Skin cells divide rapidly and more often, and therefore, we end up losing around 50 million cells every day; however, brain and nerve cells divide less often.

We hope you enjoyed studying this lesson and learned something cool about Mitosis! Join our Discord community to get any questions you may have answered and to engage with other students just like you! Don't forget to download our App to experience our fun, VR classrooms - we promise, it makes studying much more fun! 😎