🗻 Big Picture: Every living thing is made up of cells. Plants and animals have pretty similar cells, save for a few key differences. Plants have three main structures that animals do not–a cell wall, a large central vacuole, and four specialized plastids called chloroplasts, chromoplasts, gerontoplasts, and leucoplasts.

🌱 What do we have in common with plants? It’s probably hard to say. But there are a few pretty cool things we share between us. For example, plants ‘sweat’ like we do through a process called transpiration. Even cooler is the fact that new studies show that plants can actually talk to one another through their root systems and fungal connections called mycorrhizal networks! Even with these similarities, it’s still likely a lot easier to list the ways that we’re different from one another. These differences go all the way down to the cellular level, where we still share some things in common, but there are a few pretty major differences. Let’s talk about them below.

There are two kinds of eukaryotic cells: plants and animals. Both of these types of cells share many similar features within them, like a nucleus, a nucleolus, cell membrane, mitochondria, rough ER, smooth ER, golgi apparatus (golgi bodies), lysosomes, peroxisomes, and the list goes on. Even so, plant cells contain some specialized structures that animal cells do not. Features unique to a plant cell include a cell wall, large central vacuole, chloroplasts, and specialized plastids–all of which we’re going to talk about today! Let’s get started.

Both plants and animals have a soft and flexible cell membrane called the plasma membrane that separates their interior from the environment and regulates the transport of molecules into and out of the cell. Unlike animal cells, however, plant cells also have a rigid structure attached to the exterior of their membrane called the Cell Wall.

The cell wall, composed of cellulose, proteins, and other polysaccharides, contains tiny pores that allow for the exchange of water, minerals, and nutrients between the cell and its environment. This structure’s primary function is to provide structure, support, and protection for the cell.

👀 Take a look at the green hexagonal structure surrounding the cell in the 3D model above to see what a cell wall looks like!

A vacuole is an organelle that stores and disposes of various substances, and both plants and animals have them. However, instead of the tiny vacuoles found in animal cells, plant cells have one large Central Vacuole filled with a fluid called Cell Sap.

The primary purpose of the central vacuole is to store water and maintain turgor pressure, the force exerted by stored water against the cell wall. Turgor pressure changes as water moves into or out of a plant cell via diffusion during osmosis. The more water inside the central vacuole, the more turgid the cell, and the happier the plant. There is such a thing as too much water too though, which is where the rigid structure of the cell wall comes in to keep the cell from bursting. 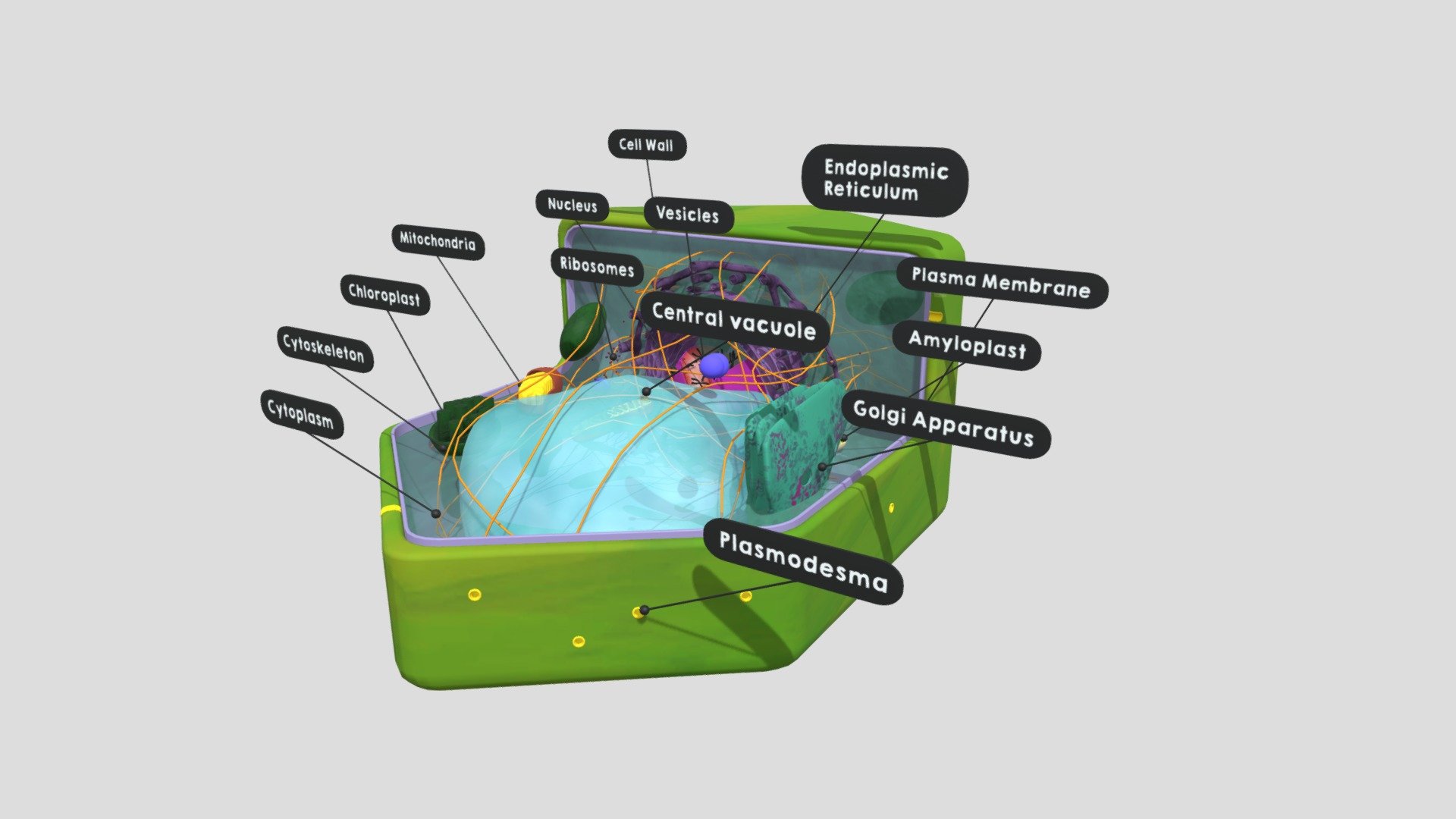 🥀 Low turgor pressure is why your plants start to wilt when you forget to water them (so here’s your reminder to do that before you forget again and they die!).

Plastids are a group of organelles found in every plant cell that are involved in the synthesis and storage of food. The most well known plant plastids are chloroplasts, which we’ll talk about first. Following that, we’ll go over some of the other specialized plastids found in a plant cell: chromoplasts, gerontoplasts, and leucoplasts.

Chloroplasts convert solar energy to chemical energy in a process called photosynthesis, during which plants convert solar energy, carbon dioxide, and water into glucose and oxygen. They contain an outer membrane, intermembrane space, inner membrane, stroma, and a thylakoid system, which is pretty similar to the structure of mitochondria. Both mitochondria and chloroplasts are thought to have evolved through the endosymbiosis theory, which is probably why they look so alike.

1. What cell structures do plant cells have that animal cells do not?

A cell wall, a central vacuole, and specialized plastids.

2. What are the three types of plastids found within plant cells?

3. What five structures compose a chloroplast?

4. What is turgor pressure?

The force exerted on the cell wall by water stored in the central vacuole.

5. Where is chlorophyll located in a plant cell?

7. What is the purpose of the cell wall?

To provide structure, support, and protection for the cell, and to keep it from bursting when water fills the central vacuole and increases turgor pressure.

8. What happens when a chloroplast gets old?

It transitions into a gerontoplast which repurposes the organelle to be used elsewhere in the cell.

We hope you enjoyed studying this lesson and learned something cool about the Plant Cell Structure! Join our Discord community to get any questions you may have answered and to engage with other students just like you! Don't forget to download our App and check out our awesome VR room for this guide - we promise, it makes studying much more fun 😎