Reproduction, a biological process, results in new offspring from parents and is a fundamental living feature. It can be divided into sexual and asexual reproduction.

Reproduction, without any doubt, is termed necessary for the survival of a species. It is a basic fundamental living feature and a biological process through which parents develop offspring. Organisms exist due to reproduction, which can be divided into sexual and asexual reproduction. Each comes with unique features, specifications, and advantages. Vertebrates, like humans, follow sexual reproduction. Here is a detailed guide on the two basic forms of reproduction. 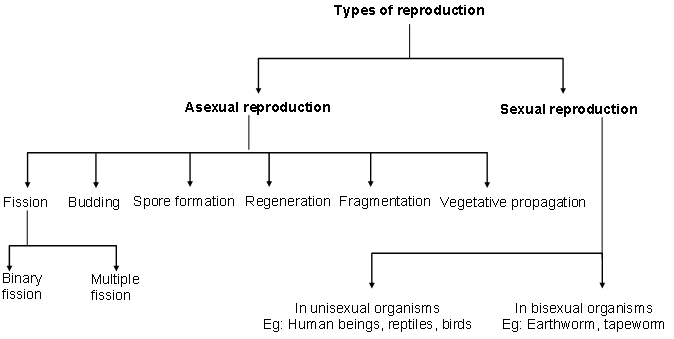 What is asexual reproduction?

In some organisms, you would notice the parent organisms dividing, forming a second one. You can observe this in asteroid echinoderms (central disc splitting). This can also be observed in some of the sea anemones and coral polyps.

In hydras, a single bud forms, later developing into an individual and then finally separating. In corals, the bud never separates but multiplies, forming a new colony. Often, fishery workers cut sea stars in half and throw them back in the ocean because they destroy the oyster farms and clams; however, these sea stars can regenerate without any hassle. Fragmentation can also be observed in turbellarians, poriferans, and annelid worms.

Key Point: In fragmentation, you would notice a difference in size in the new individual; however, for fission, the two new individuals formed would be approximately the same size.

Bees are unique in this aspect as they use parthenogenesis to produce haploid males and diploid females. Again, when the egg is fertilized, it reproduces a queen. You can also observe this type of sexual reproduction in amphibians, certain reptiles, and fish. For example, two Komodo dragons can produce this way when females are isolated from them.

What is sexual reproduction?

Sexual reproduction generally relates to combining reproductive cells from two individuals and forming a third. Sexual organisms are reproduced as having novel gene combinations. For humans, sexual reproduction happens with a male and female; however, in the animal kingdom, this term varies.

You would also find this phenomenon occurring in insects and some plants. However, when it comes to avian sex determination, the ZZ chromosome means male while ZW means female.

1. What are the examples of sexual and asexual reproduction?

2. What is the difference between sexual and asexual propagation?

3. What are the 7 types of sexual reproduction?

4. What is the difference between sexual and asexual reproduction based on the similarity of the offspring's genetic information with that of the parents?

5. Is sexual reproduction mitosis or meiosis?

Sexual reproduction cannot happen without meiosis. This stage of cell division results in a decrease of chromosome numbers to haploid numbers.

We hope you enjoyed studying this lesson and learned something cool about Sexual and Asexual Reproduction! Join our Discord community to get any questions you may have answered and to engage with other students just like you! Don't forget to download our App to experience our fun, VR classrooms - we promise, it makes studying much more fun! 😎