Air pollution and global warming are two major threats the whole world faces, and there is a dire need to control them.

Air pollution refers to the release of pollutants in the air, which are detrimental to human health and the planet as a whole. According to the World Health Organization, 90% of the earth's population is currently breathing in air, exceeding the WHO's guideline limit for clean air! Around 5-7 million deaths every year are caused by air pollution.

Air pollution can be region-specific or transboundary in its effect, whereas global warming pollution is not local; it is global and has no boundaries. It is spreading across the globe, trapping the heat around the earth for 50-200 years, once emitted, and it is ever increasing. Air pollution and global warming may seem to be two very different issues, but they are closely interlinked. 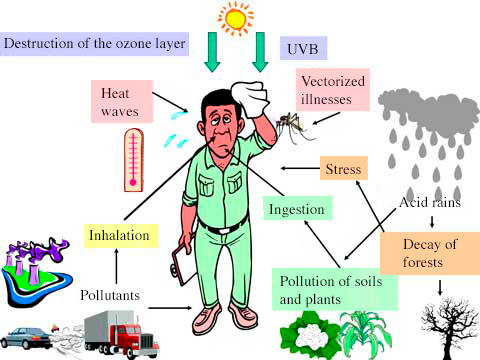 In the last 200 years, air pollution due to human activities has multiplied in magnitude, and its effects are horrendous.

Air pollutants like sulfur dioxide and nitrogen dioxide, when combined with water vapors, lead to sulfuric acid and nitric acid formation. Acidic precipitation is hazardous to humans and animals, and even architectural monuments and buildings are also ruined by it.

The ozone layer plays a crucial role in absorbing and blocking harmful UV rays. But due to the air pollutant chlorofluorocarbons (CFCs), holes have been observed in the ozone layer. If UV rays fall on us, they lead to skin cancer and others. Year by year, the ozone layer is thinning. 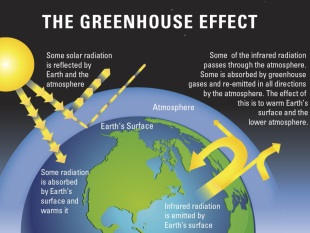 The effects of human-caused global warming are irreversible and will affect us, and the generations after generations will have to pay. It is only going to worsen decade after decade.

Some of the major effects of global warming are as follows:

Hotter days and heatwaves are already evident in many parts of the world today. Heat-related illnesses and wildfires are also the results of temperature rise. 2020 has been one of the hottest years on record. There will certainly be a significant temperature rise on earth in the coming decades, as well. Environmentalists anticipate that the arctic ocean will become ice-free by the mid of century.

Changes in temperature causes changes in the raining patterns. This also leads to frequent and more powerful storms leading to floods, landslides, destruction of life and property on a large scale.

The oceans soak up a lot of heat produced by global warming, thus melting the ice sheets and increasing the seal levels, posing a threat to the island and coastal populations. It is speculated that there will be a 1-8 feet rise in sea level by 2100.

The changing climate is risking the survival of many species both on land and in oceans. The absorption of carbon dioxide makes the oceans more acidic, which is endangering marine life. Increasing forest fires and drastically changing temperature and weather patterns are leading to endangering wildlife all over the globe.

Due to climate change, glaciers have already started to melt worldwide, thus posing threats of more frequent and stronger floods in the future.

The scarcity of water is one more adverse effect of climate change, which is likely to increase intense droughts. Droughts can stir destructive sand and dust storms, leading to the movement of billions of tons of sand across continents. Due to this, deserts are increasing, and the land for growing food is rapidly decreasing, leading to a shortage of food.

Air pollution is one of the major causes of global warming. Air pollutants like Carbon Dioxide and Methane are two of the main greenhouse gases which trap the excess heat and cause the earth to heat, hence increasing global warming.

2. What are the global effects of air pollution?

The global effects of air pollution are seen as

3. Does pollution cause global warming?

4. What is global warming?

Global warming refers to the global effect of global warming as it knows no boundaries. Global warming pollution enters the atmosphere, spreads throughout the globe, and traps heat around the earth for 50-200 years, once emitted. Global warming is not area-specific but is global.

5. How does global warming affect the environment?

Many severe effects are caused by global warming on the environment. Some of them are:

6. Why is air pollution considered a global system?

Air pollutants are carried to long distances by winds, and they transcend regional and continental boundaries, affecting global weather and climate. Hence air pollution is a global system.

7. What are the five effects of air pollution?

The five major effects of air pollution are:

9. When did air pollution become a global problem?

After the industrial revolution, in mid 19th century, air pollution and water pollution came into existence. Within a century, i.e., by the mid of 20th century, the effects of these pollutions were seen globally. For example, in 1948, in a town in Pennsylvania, a thick smog appeared for 4 days, causing 20 deaths and making 6000 sick.

We hope you enjoyed studying this lesson and learned something cool about Air Pollution and Global Warming! Join our Discord community to get any questions you may have answered and to engage with other students just like you! Don't forget to download our App to experience our fun, VR classrooms - we promise, it makes studying much more fun!