Extinction is natural, and species going extinct over a long period is very common. However, if nearly 75% of all species simultaneously across the planet vanish, it is called a ‘mass extinction.’

Life has thrived on earth for more than 3.5 billion years now, and this huge amount of geological time allowed life to exist, evolve, and occupy every ecosystem present. We can study these from the fossils present on large rocks in various parts of the world.

These not only show the life that was once present, but they also show how each species evolved and which ones are not a part of this world at present. Thousands of species like these have been wiped off the face of the earth - they have become extinct. 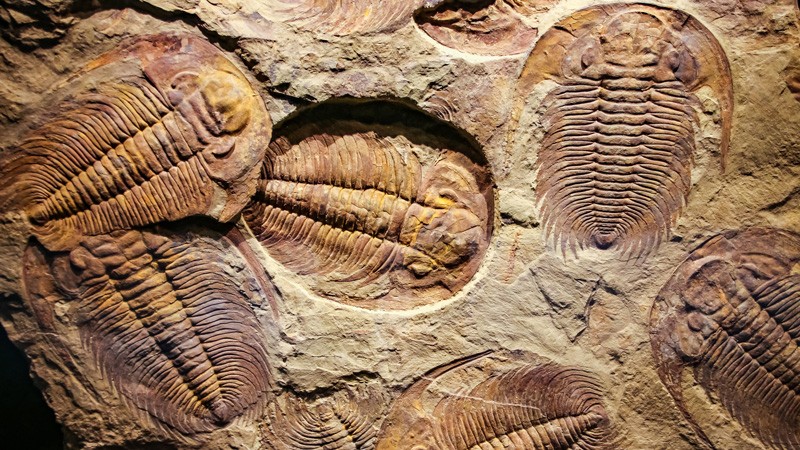 What is mass extinction?

Mass Extinction Definition: It is usually defined as the loss of around 75% of all species present across the ecosystems on earth that happens over a very short period. Since life evolved over 3.5 billion years ago, this short period is somewhere around 2.8 million years. 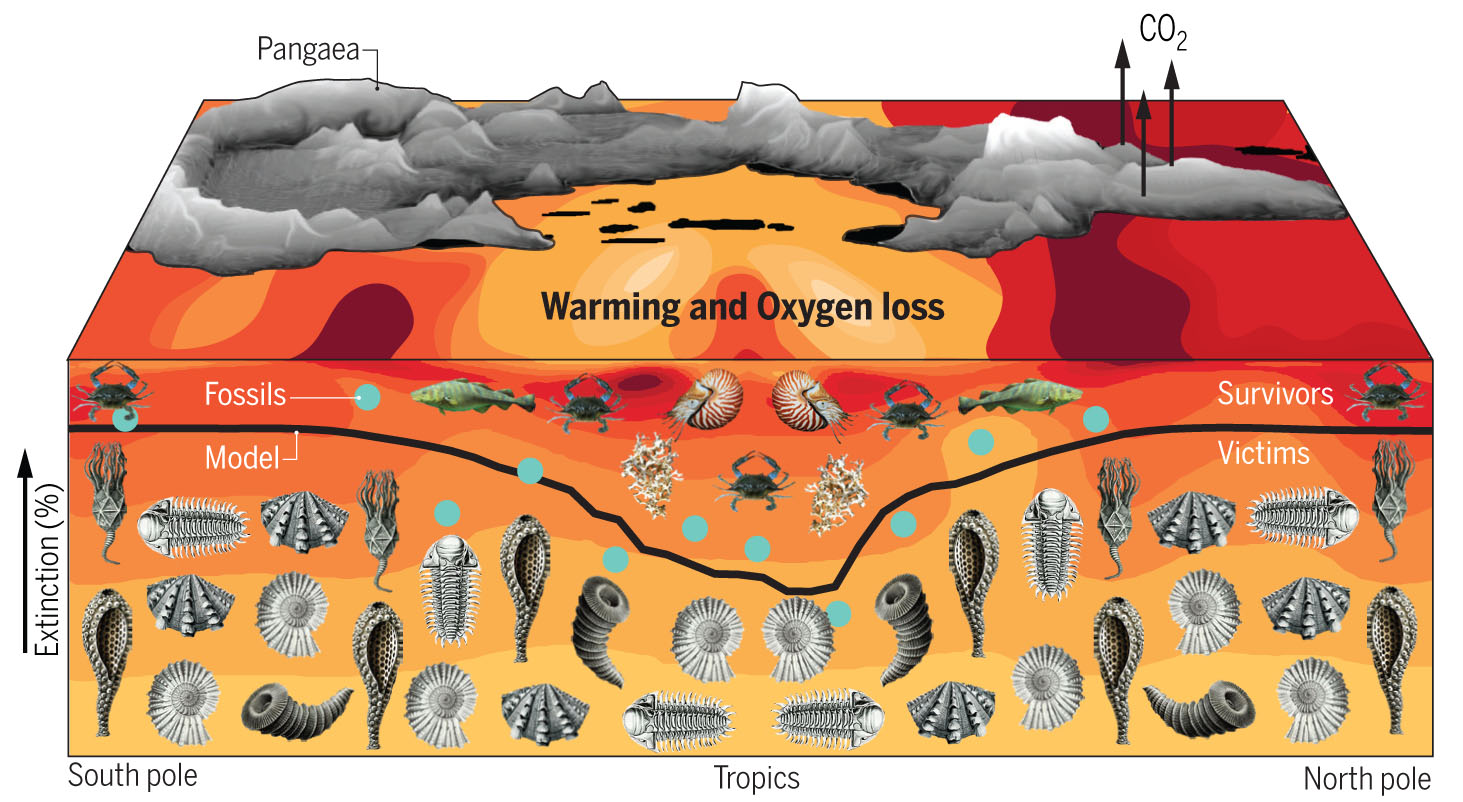 In 3.5 billion years, the planet has seen five major extinctions until now. These are: 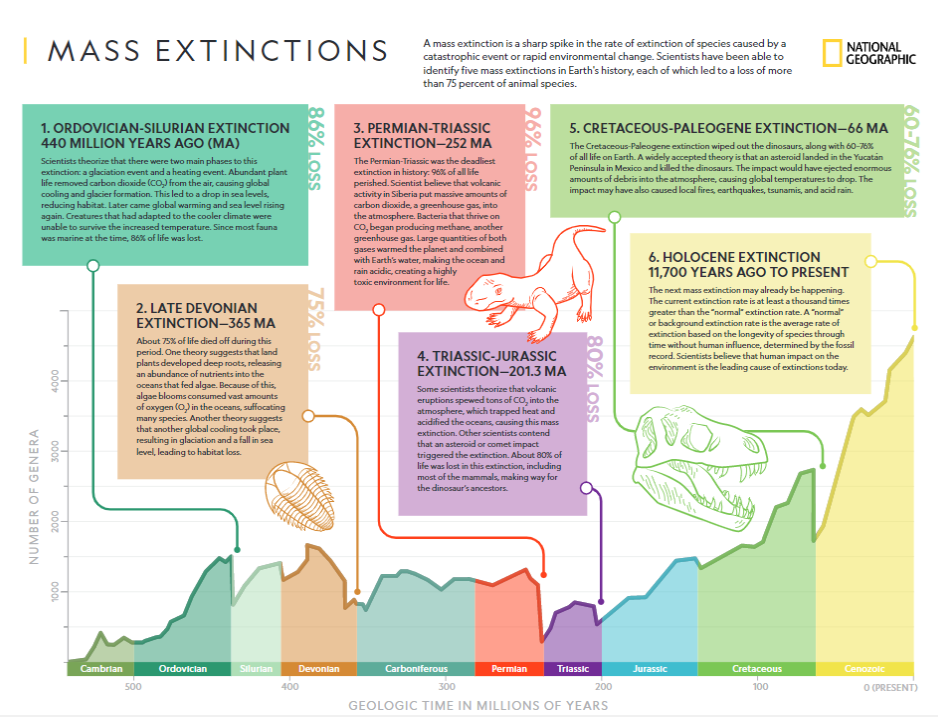 The 6th Mass extinction (also known as the Holocene Extinction) is not entirely a dramatic event like the extinction of dinosaurs due to the meteor strike. Instead, the sixth extinction is a combination of extinction that constantly happened over the last 10000 years, after humans (a single species) started dominating the planet.

This is why the 6th extinction is also known as the Anthropocene Extinction because the Anthropogenic Extinction occurs due to the involvement of humans in the loss of biodiversity all around the planet!

1. What were the 6 mass extinctions?

The 6 mass extinction events were:

2. Is a mass extinction coming?

An extinction crisis exists currently, and humans have a huge role in it because many extinction events are happening to the human exploitation of planets. However, whether this loss in biodiversity counts as a mass earth extinction would depend on the rate at which it is happening today and whether it is greater than the background rate between extinction events.

The background rate can help us calculate how fast a specific species would have died out without the interference of human beings. From the fossil record, it has been estimated that the background rate is about 1 million years for a species, but this number is not exact, and it is believed to be somewhere from 0.1 to 2.0 extinctions per million species-years.

The current extinction rate of species is about 100-1000 times higher than the background rate of extinction pre-human beings. Unlike the first 5 mass extinctions causes, today’s extinction is due to a blend of indirect and direct human activities, like fragmentation and destruction of species habitats, exploitation like hunting and fishing, human-caused global warming, chemical pollution, and more. Therefore, mass extinctions are not just coming; we are going through one currently, and we are responsible for it.

3. What is mass extinction and give an example?

When one or more species go extinct in a relatively short period due to major natural disasters, catastrophic global events, or an abrupt environmental change is known as a mass extinction. These are usually discovered through macroscopic evidence and fossil records.

4. What do we mean by mass extinction?

When the loss of species in one or more ecosystems quickly outpaces the formation of new ones, there will be an imbalance in the environment due to the loss in biodiversity, known as a mass extinction. There are many causes for an extinction-level event, and these can be natural disasters, rapid environmental changes, and external destructive events.

5. What is a mass extinction?

Mass extinction can be defined as the extinction of many different species due to factors like drastic environmental changes or a destructive global event in a relatively short span of geological time. The Permian extinction is the largest mass extinction in history. It happened around 245 million years ago, and it wiped out around 90%of the species in the marine ecosystem.

A mass extinction event happens when many species vanish from existence much faster than new species being formed. It is called a “mass” extinction because, during a ‘short period (less than around 2.8 million years), around 75% of the species present in the world is gone.

6. What is the most common reason for mass extinction?

One of the most common causes of mass extinction is the drastic changes to the carbon cycle of the planet. This change can happen for many reasons, the most common one being huge volcanic eruptions that cover thousands of square miles of land with boiling lava.

Other than the flood of lava, these eruptions are also accompanied by ejections of heat-trapping gasses sent into the atmosphere. This will encourage global warming and other related problems like anoxia (decrease in dissolved oxygen in water) and ocean acidification.

We hope you enjoyed studying this lesson and learned something cool about Mass Extinction! Join our Discord community to get any questions you may have answered and to engage with other students just like you! Don't forget to download our App to experience our fun, VR classrooms - we promise, it makes studying much more fun! 😎