Creator tools coming soon to inspirit!
Join the mailing list to know when we launch.
Biology General BiologyEvolutionHistory of Life and the Formation of the Earth Study Guide
show related resources
More on this topic
See more

History of Life and the Formation of the Earth Study Guide

🗻 Big Picture: The first microbes that ever existed on earth were around 3.7 billion years ago. Then came photosynthesis and multicellular organisms with complex cells. How old is life on earth? Let's dig deep into it!

Do you ever wonder how everything - the world and our lives today - started? How did the earth come into existence?

These questions remain a mystery to us, and while we’ve made some huge advances in our understanding, they continue to be unsolved mysteries in some ways! In this guide, we will discuss the origin of life on earth and the process of earth formation to help us crack the code.

How can we track the history of life on earth?

Well, the major source to know the history of life on earth is fossil records. Fossils are basically the remains of organisms that existed centuries ago. They form when an organism dies and is encased in dirt/rocks, and is solidified by minerals over the years. Fossils are nature’s own photographs! Fossil records refer to a group of fossils that have been preserved and analyzed in chronological order.

Another major source of evidence of life on earth are molecular clocks. Molecular clocks are used for estimation of the time period when species existed in geologic history with the help of DNA. Molecular clocks trace the genetic mutations in species over time, to understand their origin and evolution.

Formation of the Earth

So far, we know that our planet earth is the only planet in the solar system that supports living organisms. Let’s dive into a short story:

But how did life begin on earth before asteroids started randomly attacking the planet?

When and how did life begin on earth? 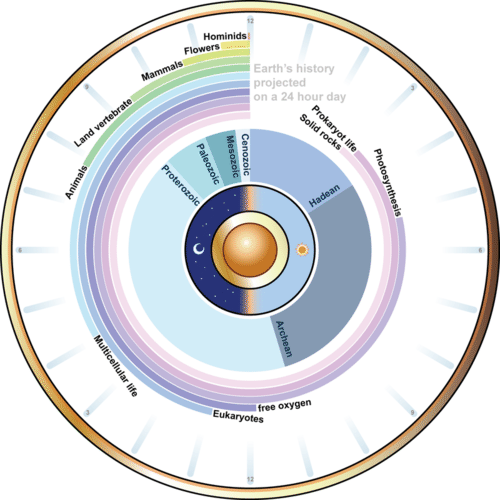 The history of life can only be predicted with the help of traces of living organisms and fossil records or molecular clocks. According to fossil evidence, how far back in time did life on earth exist?

Through molecular clocks, the DNA of mutated organisms could be traced back to their origin. After years of evolution, these animals evolved into different species - humans, fishes, birds, and more - all from a common ancestor.

1. What is the history of the formation of the earth?

Researchers say that the earth formed around 4.5 Billions year ago. Earth formed after the amalgamation of multiple solar nebulae present in space at that time.

2. What is the origin of life on the earth?

Earth used to be a lifeless planet with several elements on it. Scientists suggest that a nuclear geyser is likely to be the actual origin of life on earth.

3. When was life first formed on earth?

Traces show that the first life formed around 3.7 billion years ago. It was a fossil of a stone with a microscopic organism that can be evidence of it.

4. When and how did life begin?

Life first on Earth began around 3.7 billion years ago. A layer of stromatolites was traced on a stone, which shows the evidence of life in that time. These organisms were not dependent on oxygen for life; instead, they utilized other earth's atmosphere chemicals.

5. What were the first life forms that existed on Earth?

Microbes, mainly stromatolites, were the first life form that existed on Earth.

6. Where did the first life on earth come from?

Direct evidence of the first life on earth comes from Australian Apex chert rocks. Evidence shows that these rocks first had microbes on them.

7. Who came first on Earth?

The first thing that ever existed on earth were anaerobic organisms. Those microbes lived in the absence of oxygen under tough conditions. According to the fossil evidence, these microbes existed around 4.5 billion years ago.

We hope you enjoyed studying this lesson and learned something cool about The History of Life and the Formation of the Earth! Join our Discord community to get any questions you may have answered and to engage with other students just like you! Don't forget to download our App to experience our fun, VR classrooms - we promise, it makes studying much more fun! 😎