Natural selection is evolution's last force. This is the evolutionary process that Charles Darwin initially described, and it is the image that most people think of when they think of evolution. Natural selection occurs when certain features provide an advantage or disadvantage in terms of survival and reproductive success. The alleles associated with those qualities will change in frequency over time due to this selection pressure. It's also worth mentioning that a helpful allele might vary over time (due to environmental changes) and that a previously harmless allele can become beneficial or detrimental.

Dominant, recessive, and codominant characteristics are naturally chosen in different ways. Heterozygotes can keep deleterious (disadvantageous) recessive genes with no ill effects because natural selection works on phenotypes rather than alleles.

Natural selection was studied on the peppered moth (Biston betularia) in England during the Industrial Revolution in the 1800s.

Before the Industrial Revolution, the peppered moth population was mostly light in color, with black (pepper-like) speckles on the wings. The "peppered" color was very similar to the bark and lichens seen on the area's trees. When the moths were resting on a tree, this helped them blend in, making it more difficult for moth-eating birds to find and devour them.

From time to time, another phenotype arose in the population. These moths were heterozygotes with a hyperactive dominant pigment allele, resulting in complete black coloration. Birds found black moths easier to find than white moths, placing this genotype at a severe disadvantage. The situation changed, however, as the Industrial Revolution gathered pace.

Large enterprises began spewing large amounts of coal smoke into the air, blanketing the landscape in black soot and obliterating lichens and trees in the process. Birds found it simpler to recognize light-colored moths, whereas black moths gained the upper hand. The frequency of the dark pigment allele grew dramatically. By 1895, the black moth phenotypic had accounted for 98% of all moths seen.

As a consequence of new environmental controls, air pollution in England began to diminish in the 1960s. It was the ideal opportunity to study how the peppered moth population would react when the soot levels declined and the trees recovered to their original, lighter tint. Many follow-up studies revealed a gradual increase in the prevalence of the lighter-colored phenotype. In most parts of England, the dark phenotype has fallen to less than 10% by 2003, with a maximum frequency of 50%.

Depending on how the pressure is exerted on the population, natural selection can be classed as:

Directional selection occurs when environmental pressures favor one phenotype over the other, increasing the frequency of the matching advantageous genes. The selective pressure on peppered moths altered three times: first, it favored lighter pigment; second, as pollution grew, the pressure went to darker pigment; finally, when pollution dropped, the pressure shifted back to favoring light-colored moths. 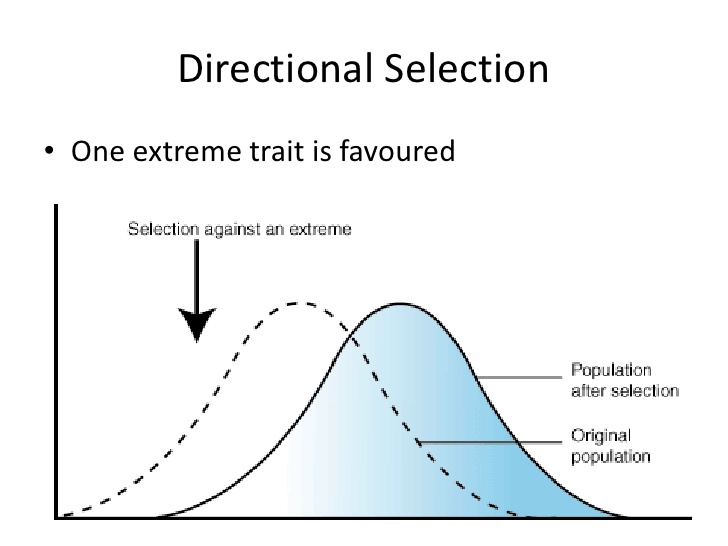 When selection favors the intermediate phenotype over the extremes of a feature, it is said to be balancing or stabilizing. Humans, for example, have a typical birth weight that strikes a balance between being little enough to avoid complications during pregnancy and labor while being large enough to maintain a healthy body temperature after delivery.

Balanced selection is the polar opposite of disruptive/diversifying selection, which occurs when both extremes of a property are favorable. If individuals with mid-range traits are selected against, disruptive selection might result in the population splitting into two species.

According to Darwin, the several types of finches (small birds) discovered in the Galapagos Islands provided vivid evidence of disruptive selection leading to speciation. According to him, the seed-eating birds had either large beaks capable of swallowing large seeds or small beaks capable of extracting little seeds. On the islands, few plants produced medium-sized seeds.

On the other hand, birds with medium-sized beaks would struggle to eat the huge seeds and would struggle to pick up the little seeds. Darwin hypothesized that the population of mid-size beaks separated into two species throughout time due to this pressure.

Natural selection prioritizes reproductive success (the ability to reproduce and raise progeny successfully) over survival. Characteristics that allure a mate are encouraged via sexual selection. These sexually appealing features may put one's life in peril at times.

1. What are the four conditions necessary for natural selection to occur?

Natural selection requires four conditions: reproduction, inheritance, variation in the fitness of organisms, and diversity in individual traits among population members. Natural selection occurs if they are satisfied.

2. What are Darwin's 5 points of natural selection?

Natural selection is a basic mechanism that affects the evolution of populations of living organisms through time. It can be broken down into five simple processes, abbreviated as VISTA: Variation, Inheritance, Selection, Time, and Adaptation.

3. What is the law of natural selection?

4. What is another phrase for natural selection?

Survival-of-the-fittest is the most commonly used phrase for natural selection.

Natural selection influences the evolution of a wide range of human characteristics, from when people start having children to their BMI.

We hope you enjoyed studying this lesson and learned something cool about Natural Selection! Join our Discord community to get any questions you may have answered and to engage with other students just like you! Don't forget to download our App and check out our awesome VR room for this guide - we promise it makes studying much more fun 😎