The Phylum Annelida is included in the domain Animalia. Annelids are found on both land and water. They are symmetrical invertebrates, and their serrated body distinguishes them.

A phylum is a collection of creatures. Segmented worms, such as earthworms, are squeezed together into phylum Annelida. Segmented worms are made up of many segments, all of which consists ofthe same length. There are around 15,000 distinct annelid species. Most individuals may be divided into three groups. In the next part, we'll describe the species for each class.

Phylum Annelida, also called as ringed worms, are commonly found in different habitats. The name of the phylum is derived from the Latin word annellus, which means a small ring. Animals in this phylum show parasitic and commensal symbiosis with other species in their habitat.

The organisms of the phylum annelida exhibit the following characteristics:

The subcategories of annelids are:

Annelid worms are classified according to their morphology and function. It ranges in size is from a single mm to three meters. Annelids may create more internal organs than most other animals due to their bigger coeloms.

Additionally, annelids have the following characteristics:

The segmentation of annelids is very flexible. To begin, it facilitates movement. Each area is densely packed with nerves and muscles. Consequently, specialized muscular contractions may be employed to move just the muscle fibers necessary for a particular motion. Additionally, a segmented animal might have specialized segments that execute specific duties. This increases the animal's total efficiency, making it more productive. Surprisingly, annelids can recover missing body parts, referred to as regeneration.

Annelida animals have a variety of structures covering their body that aid them in movement and other duties. There are species-specific differences. Numerous constructions are described in the annelida diagram below. 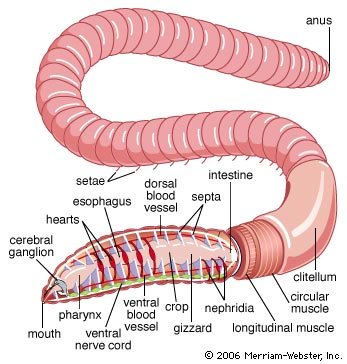 Annelids and their habitat

Annelids inhabit various habitats, including freshwater, marine, and terrestrial environments. They are entirely distinct in what they eat and how they get their nutrition.

1. What are the characteristics of annelids?

2. Do earthworms belong to phylum annelida?

Yes. Oligochaeta, or terrestrial worms, include the earthworm, which is also known as the angleworm (phylum Annelida) sometimes.

3. Are annelids solitary or colonial?

They live alone (solitary) or in colonies adhering to rocks in the aquatic environment. They are stationary, simply constructed, and come in tubular or pitcher forms.

4. How do annelids breathe?

They inhale via their skin, with the skin mucus dissolving air.

Yes, they are cold-blooded.

6. What is the difference between metameres and septa?

Separating walls or septa are constructed between the two parts internally. Annelid worms have cylindrical bodies that are both segmented internally and externally.

We hope you enjoyed studying this lesson and learned something remarkable about Annelids! Join our Discord community to get any questions you may have answered and to engage with other students just like you! Don't forget to download our App and check out our excellent VR room for this guide - we promise it makes studying much more fun 😎