An echinoderm is a member of the phylum Echinodermata, which contains several marine organisms recognized by their pentamerous radial symmetry, calcareous endoskeleton, and a water vascular system that helps operate their small podia.

Echinoderm is any group of marine invertebrates with a hard, spiny covering or skin belonging to the phylum Echinodermata. Echinoderms have a rich fossil history dating back to the Cambrian Period (542 million to 488 million years ago).

Echinoderms are classified into 21 groups based mostly on skeletal structural distinctions. There are around 6,500 living species, and over 13,000 fossil species have been described. 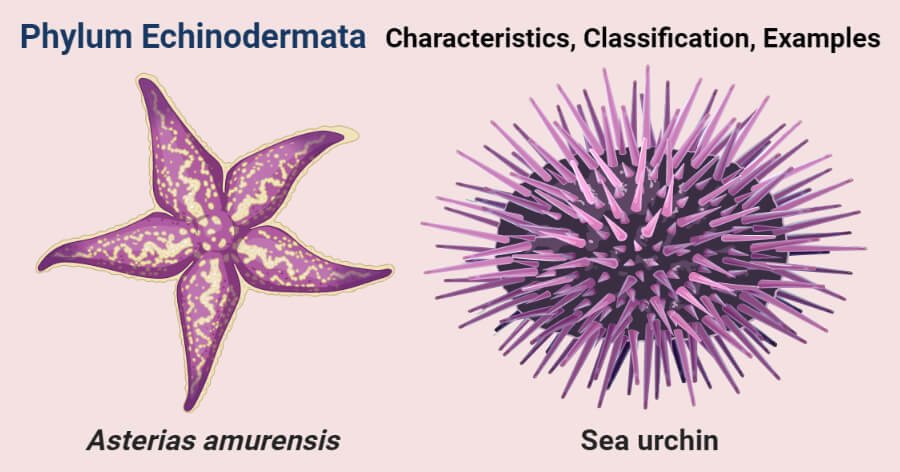 Although most echinoderms are tiny, measuring up to 10 cm (four inches) in length or diameter, some can grow to be quite enormous; for example, certain sea cucumbers can grow to be two meters (6.6 feet) long, and a few starfishes can grow to be one meter in diameter. Some of the largest echinoderms include crinoids (sea lilies) with stems as long as 20 meters (66 feet). However, crinoids are extinct now.

The surface of holothurians, on the other hand, is just warty. Echinoderms have vibrant colors, like red, orange, green, and purple. Many tropical species are dark brown or black, although brighter colors, especially yellows, are widespread among species not generally exposed to direct sunshine.

1. What are the 5 characteristics of echinoderms?

2. Which aanimals belong to echinoderms?

3. Give two examples of echinoderms.

5. What is unique about echinoderms?

Echinoderms have a distinct ambulacral or water vascular system that consists of a central ring canal and radial canals that run the length of each arm. Water travels through these systems, facilitating gas exchange, feeding, predation, and mobility.

6. What kind of food do echinoderms eat?

They eat a variety of invertebrates, including bivalves, snails, crustaceans, marine worms, other echinoderms, and even fish. They are drawn to the carcasses of deceased creatures on the seafloor.

7. Why are echinoderms weird?

Echinoderms are very sophisticated creatures with organ systems unlike anything seen in other animals. They often lack a front end, a rear end, a head, and a brain.

8. How are echinoderms important to humans?

They are a source of food and medicine for humans. Echinoderms play numerous ecological roles.

9. What do echinoderms have in common?

One feature that all echinoderms have is radial symmetry. This signifies that the organisms have appendages (or body architecture) that protrude from the body's center, similar to the spokes on a bicycle wheel.

10. What characteristics do echinoderms have?

We hope you enjoyed studying this lesson and learned something cool about Echinoderms! Join our Discord community to get any questions you may have answered and to engage with other students just like you! Don't forget to download our App and check out our awesome VR room for this guide - we promise it makes studying much more fun 😎