Information in the DNA is encoded in the form of a genetic code. The genetic code includes nitrogen base sequences in an mRNA chain.

Before understanding the genetic code, we need to understand the term ‘gene’.

What is the Genetic Code?

Genetic code is a set of instructions by which information present in molecules of heredity such as DNA or RNA sequences is translated into proteins by the ribosomes of cells of living organisms.

The part of the genome that codes for the amino acids in proteins or RNA (Ribonucleic acid) is called a gene.

Features of The Genetic Code 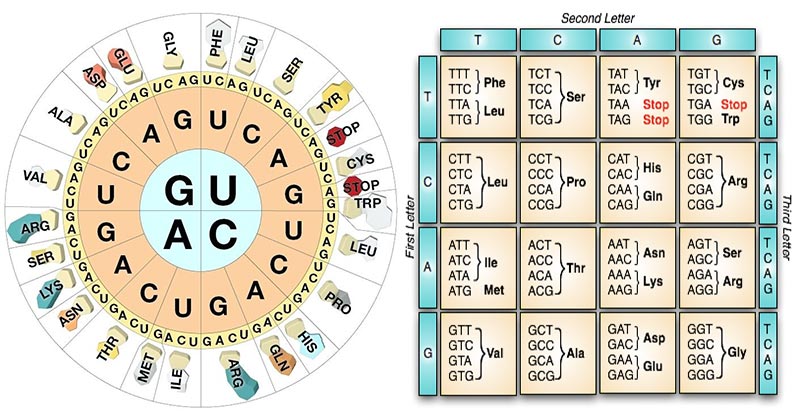 Start codons: They begin the process of translation, hence also known as initiation codons, as they start the synthesis of polypeptide chains. GUG codes for the amino acid Valine which is an example of a start codon. AUG is another example that codes for amino acid Methionine.

Properties of the Genetic Code

Among most genes, whether in animals, plants, or microorganisms, the same codons are assigned to the same amino acids and the same start and stop signal with a few exceptions.

Three RNA bases code for one amino acid in a triplet code. 64 codons code for 20 amino acids and the starting and stopping signals in the synthesis of polypeptide chains.

There are no demarcation commas or lines between the codons, so they are continuous. If a single base is deleted in a comma less code, it changes the entire sequence of the following amino acids after the point of deletion.

The other nine amino acids are coded by two codons each. This redundant code system protects an organism against any dangerous mutation in case any single base gets mutated as other codons will code for the same amino acid, and there will be no changes in the polypeptide chain.

1. What is a genetic code and its type?

The genetic code is a combination of rules which define how the four-letter code of DNA is translated into amino acids. The two types can be expressed as either RNA codons or DNA codons.

2. Why is genetic code important?

It provides evidence for the common origin of life on earth since it is similar in most living organisms.

3. What are the three principles of the genetic code?

The genetic code is always read in the 5’ to 3’ direction Codons are read as non-overlapping parts during translation There are start codons and stop codons in the synthesis of amino acids.

4. How does the genetic code work?

It is the way the four bases of DNA, A, C, G, and T, are attached that the ribosome of the cell can translate the code and synthesize proteins.

5. What are the four main features of the genetic code?

The genetic code is a universal, non-overlapping, triplet, and redundant.

6. What are the four properties of the genetic code?

The genetic code is non-ambiguous, has a polarity, comma less, and is a triplet codon.

7. What is genetic code explained in detail?

8. How many genes do humans have?

9. What does DNA stand for?

It stands for Deoxyribonucleic acid.

We hope you enjoyed studying this lesson and learned something cool about Genetic Code! Join our Discord community to get any questions you may have answered and to engage with other students just like you!Don't forget to download our App to experience our fun, VR classrooms - we promise, it makes studying much more fun! 😎