🗻 Big Picture: Transcription is the process in which a gene's DNA sequence is copied to make an RNA molecule. It occurs over three stages-initiation, elongation, and termination. This guide will cover the process from start to finish, including the finishing touches added in pre-translational mRNA processing that occurs directly after termination. Let's get started!

Transcription is a key player in the creation of proteins, macromolecules that perform a variety of functions in a cell to keep it running. Some proteins serve as antibodies and enzymes, some provide structural support, and others are used to transport and store atoms or other small molecules around a cell. They’re involved in virtually every single cell function that exists (which is super cool, but we’re here to talk about transcription today, so let’s get back to that).

Transcription is basically the first step to create a protein. During the process, RNA polymerase uses DNA as a template to translate DNA into a format that the rest of the cell can read through base pairing. The format in question is that of messenger RNA (mRNA for short). The mRNA is transported to the cytoplasm, where it’s picked up by a ribosome, which translates it again, and blah blah blah a bunch of other steps, and we finally end up with our protein (we don’t think the part in the middle is actually blah, but it’s not important for us to know right now). Now that we’ve got the gist, let’s move on to learn about the actual process of transcription. 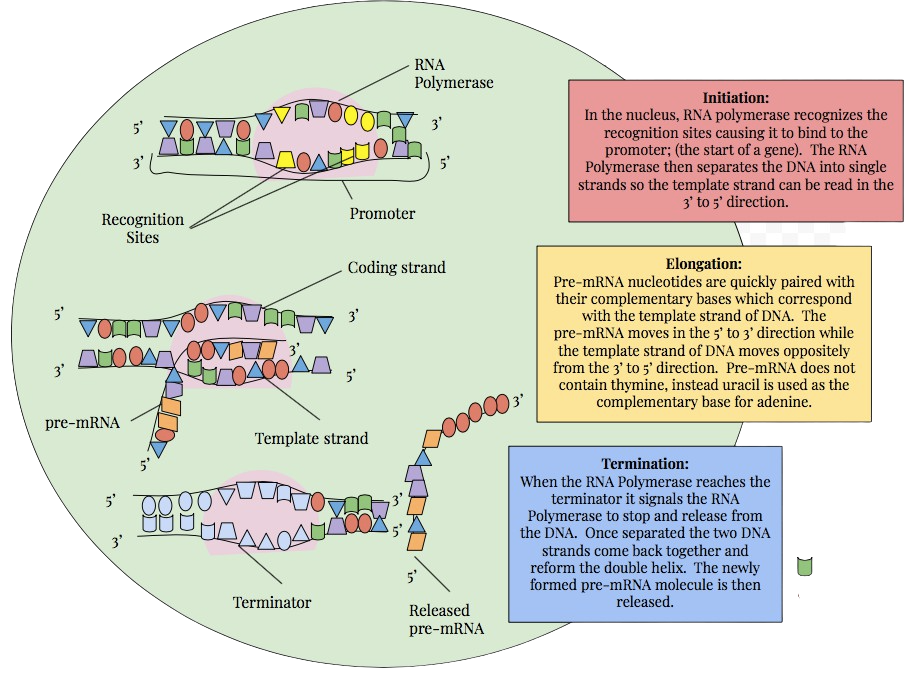 Initiation is the first step of transcription. It starts when RNA polymerase binds to a region on the DNA strand called a Promoter (which basically tells the RNA polymerase where to start transcribing). When the RNA polymerase attaches to the promoter, it unwinds a portion of the double-helix to create a sort of bubble between its strands as can be seen in the image above.

After RNA polymerase binds to the promoter, Elongation, the second stage of transcription, can begin. During elongation, RNA polymerase attaches to one of the strands of the DNA (known as the Template Strand) and moves along it in the 3’ to 5’ direction, adding nucleotides along the way.

As it moves along the template strand, RNA polymerase adds the appropriate complementary nucleotides in a sequence almost identical to the other strand of DNA (known as the Coding Strand). The only difference is that uracil is substituted for thymine, as you can see in the A-U pairing in the diagram below. As new nucleotides are added, the RNA strand becomes longer, which is where this particular stage of transcription gets its name (long-er, e-long-ation, get it?).

Elongation continues until the RNA polymerase encounters a “stop sequence" called a Terminator on the DNA strand. A terminator is a chunk of nucleotides in a specific order that indicates the replication process is over. Termination begins once the terminator has been reached, and as quickly as it starts, it ends. Because once the new RNA strand is complete and RNA polymerase detaches from the DNA, the process of transcription is over.

Remember before when we were talking about mRNA? Well, that brand new strand of RNA that we just spent all this time making isn’t actually messenger RNA yet. We call it Pre-mRNA, and during Pre-mRNA Processing, we apply the finishing touches by adding a 5’ cap and a poly-A tail and removing “junk” sequences through a process called splicing. 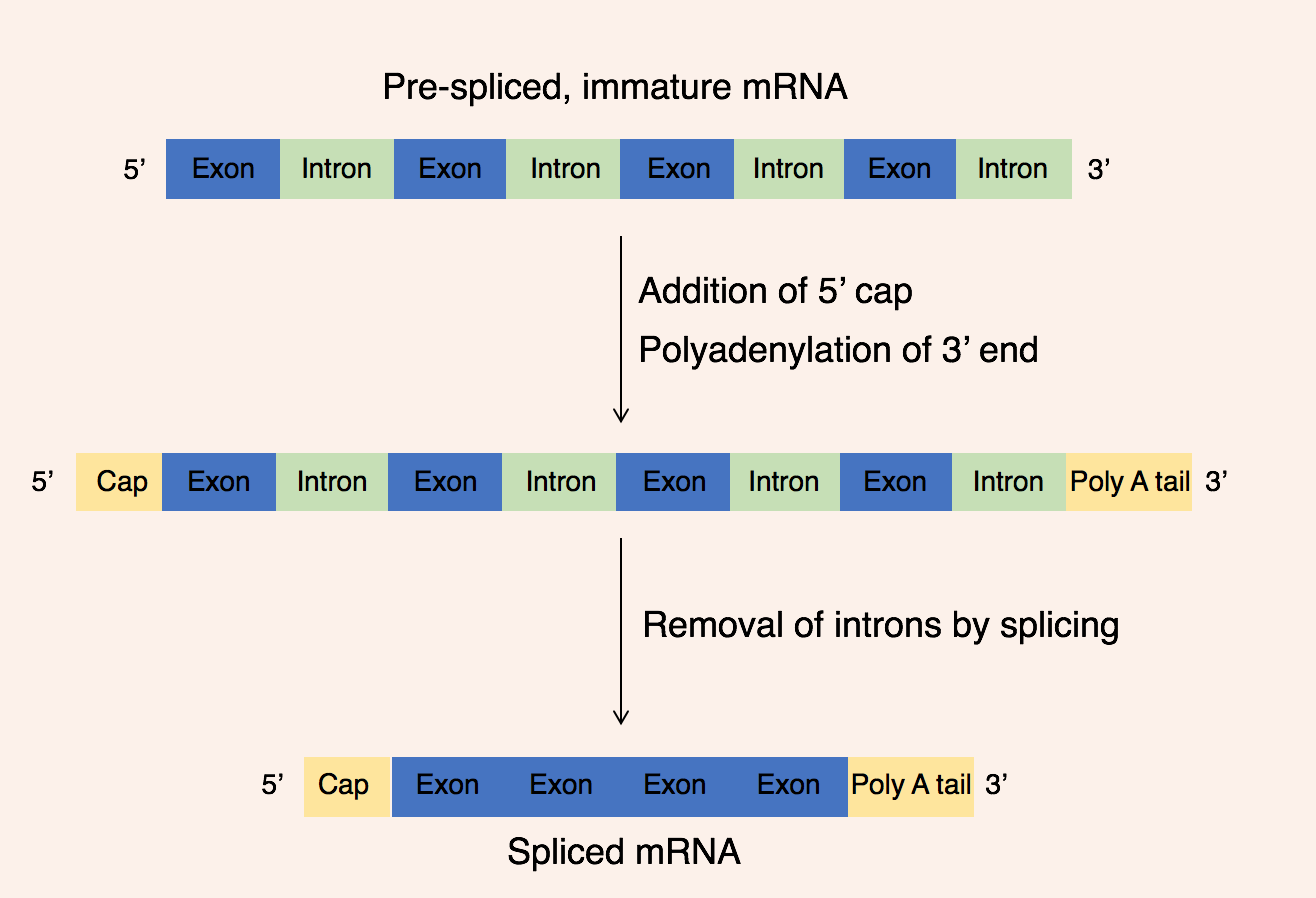 Think of our strand of RNA as a shoelace that’s fraying at the ends. If we leave the ends loose, our entire shoelace may end up unraveling, which is why we seal the tip with an aglet (a fun new little vocab word for you). The 5’ cap that we add to the RNA strand works in a similar way.

The 5’ Cap is made of methylated guanine and is attached to the first nucleotide of the strand at the 5’ end to protect it from being broken down. It’s also the point where ribosomes in the cytoplasm can attach to it to begin protein synthesis. The Poly-A Tail is made of hundreds of adenine nucleotides and is attached to the 3’ end of the strand to stabilize the RNA molecule and help it move from the nucleus to the cytoplasm.

Now that we’ve tied up all of our loose ends (hah), the final RNA processing event, RNA splicing, can begin. In our strand of RNA, we have a bunch of good parts that we call Exons and a few bad ones that we call Introns. Introns aren’t inherently bad, they’re just sort of useless, and they prevent the mRNA from coding a new protein with all of the good parts of the sequence. Introns are removed with a protein-RNA complex called a spliceosome. Once they’re gone, the spliceosome seals together the rest of the exons to create the final, complete strand of mRNA that is then shipped out of the nucleus to the cytoplasm.

In Transcription, RNA polymerase creates a strand of RNA by using DNA as a template. We’ve already gone through that process, so let’s skip ahead to when the finished strand is shipped out from the nucleus.

Basically, transcription uses DNA to make mRNA in the nucleus, and translation uses mRNA to synthesize proteins in the cytoplasm. 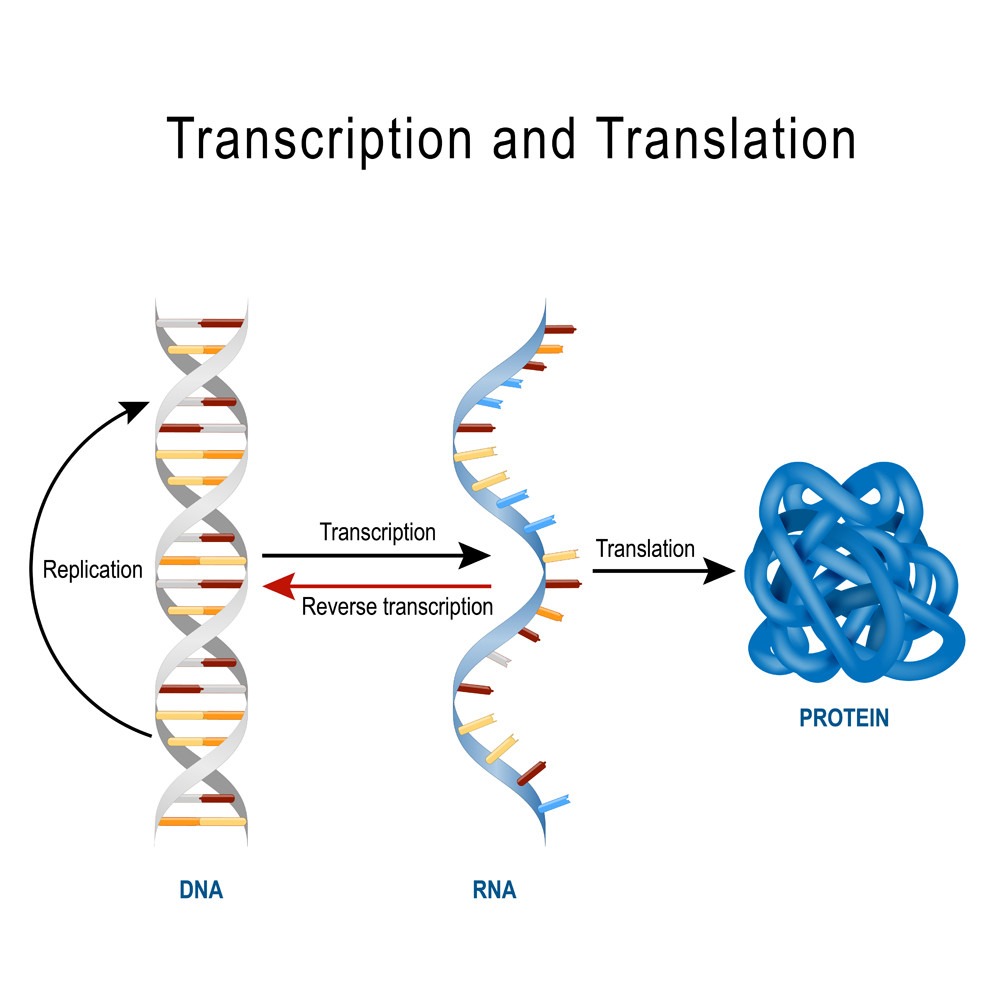 The process through which DNA is copied to RNA is called transcription.

2. What are the 3 stages of transcription?

Initiation, elongation, and termination are the three stages of transcription.

3. What is the difference between transcription and translation?

During transcription, DNA polymerase makes mRNA from a DNA template in the nucleus, while in translation, ribosomes synthesize proteins from the mRNA instructions in the cytoplasm.

An intron is a “junk” sequence in an RNA strand that is removed during the splicing stage of pre-translational mRNA processing.

5. What occurs during initiation?

During initiation, RNA polymerase binds to the promoter on the DNA strand.

6. How does DNA polymerase know when to stop transcribing RNA from DNA?

DNA polymerase stops transcription when it meets a specific sequence of nucleotides on the DNA strand called a terminator.

7. Does DNA polymerase add nucleotides to the template strand or the coding strand?

We hope you enjoyed studying this lesson and learned something cool about Transcription! Join our Discord community to get any questions you may have answered and to engage with other students just like you! Don't forget to download our App and check out our awesome VR room for this guide - we promise, it makes studying much more fun 😎