Bacteria Reproductive cells can multiply rapidly. Given the right conditions, a single E. coli can grow into a billion-strong colony in just a few hours.

The fact that bacteria are single-celled prokaryotic creatures prevents the existence of a male or female form of the organism. Bacteria reproduce asexually! When an asexual reproduction process is used, the 'parent' creates a genetically identical replica of themselves.

How do bacteria reproduce?

Binary fission is the asexual reproduction method used by bacteria, and it is the most common method.

Temperature and the availability of nutrients affect reproduction in various ways, including the rate and timing of the process. E.coli, often known as Escherichia coli, produces roughly 2 million germs every seven hours under ideal circumstances. There are just a few highly uncommon cases of sexual reproduction occurring during bacterial reproduction.

Bacteria can undergo genetic recombination by conjugation, transformation, or transduction. As a result of the bacterium's genetic diversity, it may likely become antibiotic-resistant (as opposed to asexual reproduction where the same genetic material is present in generations). 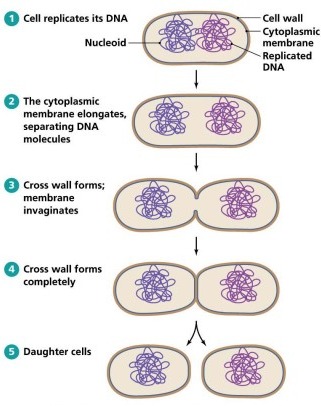 Binary fission splits the chromosome into two identical copies, and the cell then divides into two new cells called 'daughters.' Each of the two daughters contains two exact copies of the mother cell. Binary fission may occur in a couple of milliseconds, and certain species of bacteria may triple their population in less than ten minutes! Bacteria colonies may be started with only one cell using this procedure.

Is there a difference between male and female bacteria? Of course, the answer is a resounding no. As a result, sexual reproduction is not possible in bacteria. However, not all newly discovered bacteria are clones since bacteria may acquire new DNA. There are three distinct methods in which this Bacterial Reproduction process takes place:

1. What are the 3 ways bacteria reproduce?

2. How do bacteria reproduce sexually?

Only bacteria and archaea reproduce primarily by binary fission. Bacteria are sexually unable, although they are capable of transferring genetic information. Two bacteria come into contact through a pilus and exchange genetic material (a bacterial structure). This is known as conjugation.

3. Do all bacteria reproduce sexually or asexually?

Even though bacteria are single-celled prokaryotic creatures, they do not have a male or female counterpart. Bacteria reproduce asexually.

4. What are the two methods of bacterial reproduction?

5. What type of asexual reproduction do bacteria most commonly use?

6. Does E.coli reproduce sexually or asexually?

We hope you enjoyed studying this lesson and learned something cool about Bacteria Reproduction! Join our Discord community to get any questions you may have answered and to engage with other students just like you! Don't forget to download our App to experience our fun, VR classrooms - we promise, it makes studying much more fun! 😎