Find all about Fungi here – description of fungi, their structure, fungi characteristics, reproduction, their important role in nature, and usage in medicine and industries.

Structure of a Fungi:

The structure of fungi can be described as follows. 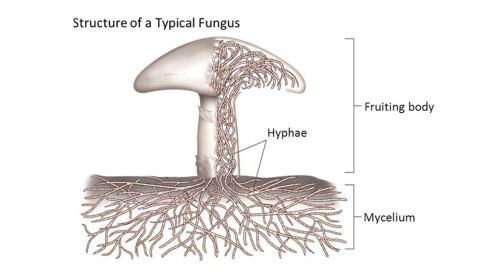 Following are the important characteristics of fungi:

Fungi are classified based on different parameters as follows:

Based on nutrition, kingdom fungi can be classified as:

- Parasitic – The fungi get their nutrition by living and absorbing nutrients from their host organisms (plants or animals). Examples: Taphrina and Puccinia.

- Symbiotic – These fungi have an interdependent mutually beneficial relationship with other species. Examples: Lichens and mycorrhiza.

Fungi are classified into the following based on the formation of spores:

- Zygomycetes – The fusion of two different cells forms these.

- Ascomycetes – They are also called sac fungi. They can be coprophilous, decomposers, parasitic or saprophytic.

- Deuteromycetes - They are otherwise called imperfect fungi as they do not follow the regular reproduction cycle of the other fungi.

- Vegetative reproduction – happens by budding, fission, and fragmentation. Hyphae are divided into separate cells by end walls, and this division between cells in many fungi is called Septa.

Fungi are one of the most important groups of organisms on the planet. It plays a vital role in the biosphere and has great economic importance for its benefits and harmful effects.

Some of the important uses of fungi are:

1. Recycling – They play a major role in recycling dead and decayed matter.

2. Food – Mushrooms are edible, cultured, and used as food by humans.

3. Medicines – Many fungi are used to produce antibiotics, to control diseases in humans and animals. Penicillin antibiotic is derived from common fungi, Penicillium.

4. Bio-control Agents – Fungi exploit insects and other small worms to control pests. Spores of fungi are used as spray-on crops.

5. Food spoilage – Fungi play a major role in recycling organic material and are responsible for major spoilage and economic losses of stored food.

Common examples of Fungi are:

1. What is the structure of fungi?

A typical fungus comprises a mass of branched, tubular filaments enclosed in a rigid cell wall. The filaments (called hyphae) branch into a radially expanding network called the mycelium.

2. What are fungi? Explain in detail?

3. What are the main structural parts of fungi?

The body of most fungi is made up of fine, branched, and usually colorless threads called hyphae. Vast numbers of these intertwining hyphae make up a tangled web called the mycelium.

4. What are fungi and their characteristics?

Fungi are eukaryotic organisms. Some of their key characteristics include: they are heterotrophs; reproduce sexually or asexually; there is no embryonic stage for fungi, and reproduce using spores.

5. What are the four structures of fungi?

6. Are fungi heterotrophic or autotrophic?

Fungi and bacteria are responsible for breaking down organic matter and releasing carbon, oxygen, nitrogen, and phosphorus into the soil and the atmosphere. Fungi are essential to many household and industrial processes, notable among them being fungi used to make bread, wine, beer, and certain cheeses. Like bacteria, fungi play an essential role in ecosystems by performing the role of decomposers, and they recycle nutrients by breaking down organic matter into simple molecules.

8. Why are fungi important?

Fungi are important for the key role they play in nature. Fungi decompose organic matter and release carbon, oxygen, nitrogen, and phosphorus into the soil and the atmosphere. Fungi are essential to many household and industrial processes, notably the making of bread, wine, beer, and certain cheeses.

We hope you enjoyed studying this lesson and learned something cool about Fungi – Overview and Structure! Join our Discord community to get any questions you may have answered and to engage with other students just like you! Don't forget to download our App to experience our fun, VR classrooms - we promise, it makes studying much more fun!😎