Mammals belong to the class Mammalia within the animal kingdom under vertebrates.

Mammals belong to the class Mammalia which is the phylum Chordata in the kingdom Animalia. There are 6,495 different mammal species divided into 125 families and 28 orders based on their distinct characteristic features.

An animal is considered a mammal if it can produce milk. Other distinct taxonomic features that separate mammals from other classes of animals are hair or fur, a middle ear with 3 bones, single-boned lower jaws, one-time tooth replacement, an advanced diaphragm, and four-chambered heart, among others.

Though mammals belong to one class, they can be divided into three main categories: Prototheria, Metatheria, and Eutheria, each of which is divided into a variety of orders. 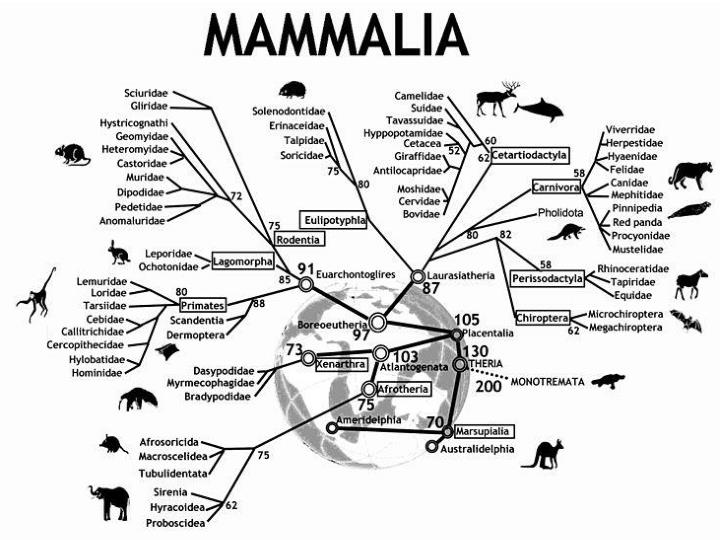 Prototheria contains only one order:

Eutheria consists of the following orders:

Mammals are separated into three main groups based on how they reproduce: monotremes, marsupials, and placentals mammals.

Monotremes lay telolecithal eggs (meaning they have a yolk) enclosed within shells, as is also seen with birds and reptiles. The eggs hatch and the emerging young ones depend on the parents to feed them, help them fly, and take care of them.

In Marsupials, the uterine wall is not differentiated for the fertilized embryos to be implanted. The developing fetus migrates through the vagina to the breasts for nutrition and resides in a pouch called the “Marsupium” until it is completely developed.

The marsupium may either be single (like the ones seen in kangaroos) or compartmented (like the brush-tailed possums, which have a teat in each compartment). Offspring are carried for different periods in different animals, for example ten months in kangaroos, eight months in koalas, and thirteen to fourteen weeks in the North American possum.

Placental mammals produce hormones like estrogen and progesterone through an interaction between the pituitary gland and the female reproductive ovaries, which leads to the menstrual cycle. The eggs or ova are produced and fertilized by sperm from their male counterparts, with whom they mate during copulation or coitus.

Once fertilized, the egg is embedded within the endometrium where it matures and grows with the help of nourishment received through the placenta (hence, placental).

1. What are the three categories of mammals based on reproduction?

2. What is an example of a marsupial?

3. To what kingdom, phylum, and class do mammals belong?

4. What are the three major groups of mammals?

6. What are 5 examples of mammals?

We hope you enjoyed studying this lesson and learned something cool about Mammals Classification! Join our Discord community to get any questions you may have answered and to engage with other students just like you! Don't forget to download our App to experience our fun, VR classrooms - we promise, it makes studying much more fun! 😎