The size of an atom or the atomic radius of any chemical element is the measure of the size of the atom. It is the distance from the nucleus center to the boundary of surrounding electron shells.

Have you ever wondered what your body is made up of? What about the ball you play soccer with? Ever wondered what plants are made of? You might have heard the word 'atom,' but do you know what it is? Atoms are considered the basic units of matter and everything on the earth is made up of atoms except for energy.

Where does the word atom come from? Atom comes from the classic Greek word for indivisible because it was thought then that atoms are the smallest universal thing and they cannot be further divided. Ernest Rutherford first discovered the nucleus in 1911, as stated by the American Institute Of Physics. In 1920, he was the first one to propose the name proton for positive charged atomic particles. He also stated that there was a neutral particle which later on, his student, James Chadwick, confirmed in the year 1932.

WHAT IS ATOMIC SIZE?

Atomic size is the distance between the atom's outermost shell and that to the center of the nucleus.

WHAT IS ATOMIC RADIUS?

Atomic radius is half of the distance between the adjacent atoms of the same element in a molecule. 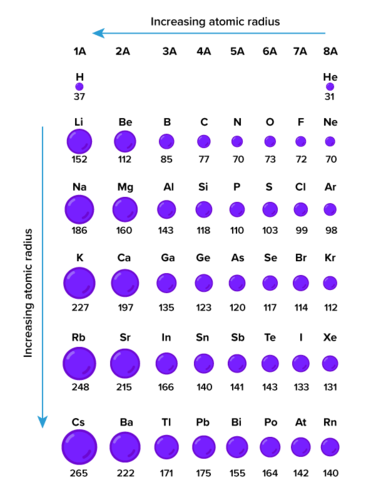 How is atomic radius determined? It is a complicated process and is usually done by X-ray or spectroscopy methods.

Yes, atoms do have sizes.

2. What is smaller than an atom?

Atoms can be divided into protons, neutrons, and electrons.

We hope you enjoyed studying this lesson and learned something cool about Atom Size! Join our Discord community to get any questions you may have answered and to engage with other students just like you! Don't forget to download our app to experience our fun VR classrooms - we promise it makes studying much more fun! 😎