Orbital chemistry refers to an atomic orbital, which is a path in which an electron revolves around the nucleus.

Ancient astrologers were successful in establishing that the Earth revolves around the Sun. Over the years, the science behind this hypothesis advanced, and we came to an understanding that planets revolve around a star in a definite orbit due to the strong gravitational pull of the star in its solar system.

Similarly, physicists, after years of hard work, established that every substance is made of atoms, and every atom is made of electrons, protons, and neutrons. Electrons revolve around a subatomic particle known as a nucleus.

The path of the revolving electron is termed an orbital. However, there’s a big difference between orbits and orbitals. In the case of planetary orbits, you can predict the path because trajectory and location are known. This is not the case with atomic orbitals.

In this guide, we will try to answer the question — what is an orbital in chemistry?

WHY IS IT IMPOSSIBLE TO DRAW ORBITS FOR ELECTRONS?

If we determine the position of an electron at a specific point in time and locate it again after that point, we’ll find that its position has changed; however, we’re unable to find the momentum of a said electron in either scenario and are therefore unable to determine its trajectory.

This phenomenon is summarized by Heisenberg’s uncertainty principle, which states that it is impossible to accurately define the position and momentum of an electron simultaneously, even in theory. As a result, we cannot draw a conclusive orbit for an electron around the nucleus in the same way we can for a planet revolving around a star.

We use a 3D map of an electron's movements as they occur at different times to attempt to overcome this problem. With these maps, we find that 95% of the time an electron stays close to its nucleus in a spherical path. This path is what we call an orbital, and is to an electron what an orbit is to a planet.

WHAT ARE DIFFERENT ORBITALS?

Every atomic orbital has a name depending on its proximity to the nucleus. In the case of hydrogen, which has one electron, the orbital is called 1s, meaning it is found at the first energy level of the atom closest to the nucleus. The 1 denotes the energy level, while the 's' represents its shape, in this case spherical, like a chunky hollow ball with the nucleus at its center. Now, let's take a look at this diagram: 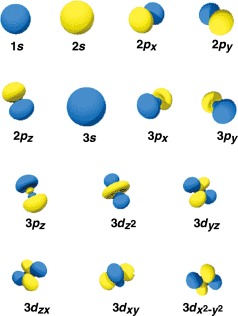 In this diagram, the 2s orbital appears to be similar to the 1s orbital. However, in this case, the electrons revolve farther away from the nucleus. The number '2' denotes that the orbital is at the second energy level.

There are other orbitals other than the s orbital. When we talk about the first energy level, the only orbital available for occupancy is the 1st orbital, which is denoted as 1s. But, at the second energy level, there are two orbitals available, 2s and 2p. A p orbital is shaped like two identical balloons.

Also, these identical balloons are tied to the nucleus. The orbital here denotes the highest chance of finding a particular electron. In a horizontal plane, the p orbitals are arranged at right angles to each other along the x, y, and z-axis.

WHAT ARE QUANTUM NUMBERS?

According to Hund's rule:

Before any orbital in a sublevel is double occupied, it is singly occupied. In singly occupied orbitals, all electrons have the same spin (to maximize total spin).

1. What is an orbital in chemistry?

Atomic orbitals are the path in which the electron revolves around the nucleus.

2. What are the four types of orbitals?

The four orbitals are mainly categorized as s,p,d, and f, depending on the energy level of the electrons.

We hope you enjoyed studying this lesson and learned something cool about Atomic Orbitals! Join our Discord community to get any questions you may have answered and to engage with other students just like you! Don't forget to download our app to experience our fun VR classrooms - we promise it makes studying much more fun! 😎