Entropy in everyday life is a crucial concept that you would come across while studying chemistry and physics. It is defined in various ways and serves various purposes.

Have you ever spent a day organizing your room only to find it back in the same state of disarray a few days or weeks later? Nature has the tendency to decline gradually from order to disorder and randomness, a concept known as entropy. Entropy is utilized in many fields, including cosmology, thermodynamics, economics, and chemistry. It exists not only in concept, but also as a measurable physical property that is always related to uncertainty in one way or another.

WHAT IS ENTROPY IN CHEMISTRY?

Entropy is the measurement of systemic disorder. It is considered an extensive property of a thermodynamic system, and its value changes depending on the amount of matter the system contains. The entropy of a system is the sum of all entropies within said system, and any change in entropy results from interactions between the system and its surroundings. In equations, entropy is represented by the letter “S” with the unit joules per kelvin (J/K). A system that is highly ordered has very low entropy. 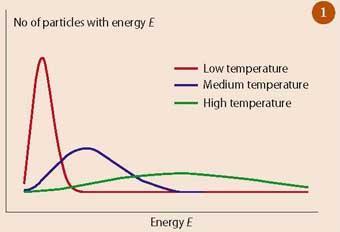 In thermodynamics, a reversible process is a process that occurs between a system and its surroundings that can be reversed by a change in the properties of the surroundings, such as temperature or pressure. In a reversible process, the system remains in physical and chemical equilibrium, meaning its entropy value is always zero.

When it comes to calculating the entropy of a reversible process, there are quite a few assumptions to keep in mind (the assumption that each configuration within the process is equally probable for example). Considering the outcomes having equal probability, entropy equals Boltzmann’s constant multiplied by the natural logarithm of all possible numbers of states (W). In equation form, this is written as:

Where ΔQ = the change in the heat energy of the system (J), T = the absolute temperature of the system (K), and ΔS = the entropy of an isothermal process (J/K).

Internal energy is the energy contained within a thermodynamic system. It is an extensive property and thus cannot be measured directly. To find the value of a system’s internal energy, we can use the following equation:

Where, ΔU = the change in the internal energy of a system, q = the heat energy exchanged between a system and its surroundings, and w = the work done by the system.

SECOND LAW OF THERMODYNAMICS AND ENTROPY

The second law of thermodynamics states that the total entropy within a closed system does not decrease. However, in a system, the entropy of one system could decrease while raising the entropy of another system.

EXAMPLES OF ENTROPY IN EVERYDAY LIFE

1. What is an example of entropy in everyday life?

Melting ice is an example of entropy in everyday life.

2. What are some examples of entropy?

Some examples of entropy would be the melting of ice, sugar dissolving, and a campfire.

We hope you enjoyed studying this lesson and learned something cool about Entropy! Join our Discord community to get any questions you may have answered and to engage with other students just like you! Don't forget to download our App to experience our fun VR classrooms - we promise, it makes studying much more fun! 😎