This article provides a detailed analysis of the ion vs. atom topic and aims to clarify some doubts.

Atoms are the primary building blocks of matter. Because atoms were formerly supposed to be the smallest particles in the universe and couldn't be separated, the term "atom" derives from the Greek word "indivisible." Charged atoms or molecules are called ions. Before discussing the differences between the two, we need to know about them in detail.

A BRIEF IDEA ABOUT THE ATOM

All matter is made up of atoms, the smallest units of matter. According to contemporary atomic theory, an atom is made up of two parts- the nucleus and the atomic orbital surrounding it. Positively charged particles constitute the nucleus, also known as protons, and neutrally charged particles or neutrons. A proton has a charge of 1, while the neutrons do not carry any charge.

There is an electron cloud surrounding the nucleus, in which the atom's negatively charged electrons are moving along imaginary orbitals. The electrical charge of an electron is -1. All the atoms of a certain element are similar to each other, i.e., the number of protons, neutrons, and electrons is the same for all the atoms of a particular element.

Molecules and compounds are formed when atoms are joined together by chemical bonds. Covalent, ionic, coordinate, and metallic bonds are examples of these types of bonds through which electrons are generally exchanged. A net electrically charged atom or molecule is known as an ion. An atom or a molecule gives up or receives electrons, forming ions. Ions can be either positively charged or negatively charged. When an atom loses electrons, the number of protons in the atom becomes more than the number of electrons.

An electric field can attract since they are electrically charged entities. Cations are attracted towards the negative pole, whereas anions toward the positive pole. 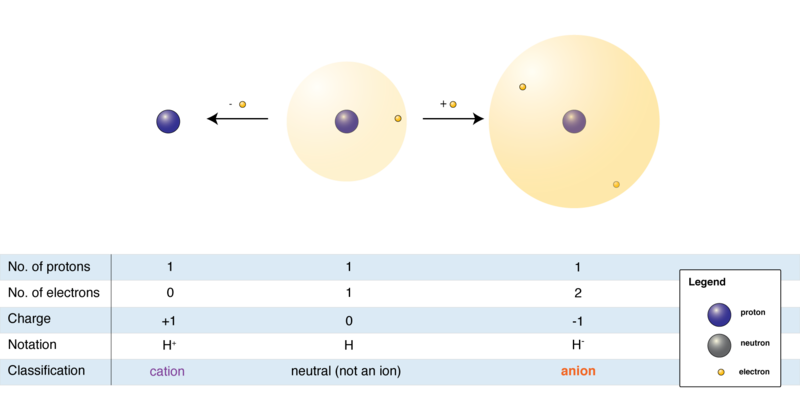 1. How do atoms and ions differ?

The difference between atoms and ions is as follows –

The basic component of all matter is the atom, whereas ions are electrically charged particles. Since the number of electrons and protons remain equal in an atom, the charge remains neutral. On the other hand, an ion is formed every time an atom gains or loses an electron, negatively or positively charged, respectively.

This implies that the number of electrons and protons do not remain the same in ions. Due to this, an ion is attracted to an electric field with an opposite charge, while an atom remains neutral in any electric field.

2. What do ions and atoms have in common?

The similarities between them are that both contain electrons that can be exchanged.

3. Are atoms or ions more stable? Why?

Since ions are electrically charged particles and are more prone to react with other elements, atoms are more stable.

4. Where can we find negative ions?

Negative ions are abundant in nature, especially near waterfalls, while surfing the ocean, on the beach, and in the highlands.

We hope you enjoyed studying this lesson and learned something cool about Atoms vs. Ions! Join our Discord community to get any questions you may have answered and engage with other students like you! Don't forget to download our App to experience our fun VR classrooms - we promise, it makes studying much more fun! 😎