According to the kinetic molecular theory of matter, matter is composed of continually moving particles.

Recognize these crazy balls that made our childhood so much fun? The harder you threw it, the more it would bounce. The science behind this is pretty simple. The harder you throw the ball, the greater the kinetic energy you provide to the ball, resulting in greater velocity and eventually more bounce. Similar is the concept of the kinetic molecular theory in chemistry, that we are about to discuss. 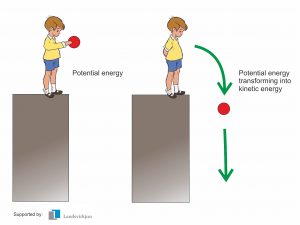 The kinetic molecular theory explains how microscopic properties of atoms and their interactions can be observed at the macroscopic level (like pressure, volume, temperature), as well as their interaction with one another. Using the concept, we may be able to explain why matter consists of various stages and how matter can change between them.

According to the kinetic molecular theory of matter:

The kinetic molecular theory is easiest to apply to gasses. Every gas molecule is thought to be self-contained and unaffected by the presence of other gas particles. When a gas particle collides with another gas molecule, it simply bounces off in the opposite direction without any speed change. The same logic applies to hot air balloons. As air particles heat up and rise, they collide with the interior of the balloon, propelling it higher into the air.

1. What are some examples of kinetic molecular theory?

2. What is the application of kinetic molecular theory?

The kinetic molecular theory may explain each of the empirically established gas laws. The pressure of a gas is caused by clashes between the gas molecules and the container's surfaces. When a gas particle collides with a wall, it generates a force on it.

3. What is the kinetic theory of matter? Explain it with an example.

According to the kinetic molecular theory of matter, the matter is composed of continually moving particles. Every particle has energy, however the amount of energy changes based on the temperature of the matter specimen. The condition of the material is then determined by whether it is solid, liquid, or gaseous.

We hope you enjoyed studying this lesson and learned something cool about Kinetic Molecular Theory! Join our Discord community to get any questions you may have answered and to engage with other students just like you! Don't forget to download our app to experience our fun VR classrooms - we promise it makes studying much more fun! 😎