Mendeleev proposed a periodic table in which elements are arranged in order of increasing atomic masses, and the elements having similar properties are grouped together.

Imagine you are in a room with clothes lying on the floor, on the chair; in short, all you can see are clothes everywhere. Won't you feel anxious in this huge mess of clothes? Imagine what the scientists would have felt when there were too many elements! Let's see how they managed to sort out the huge number of elements. Let’s take a crash course about the periodic table.

THE DIVISION OF GROUPS:

The groups in the table were divided on the basis of H and O required by the elements to form compounds. For example, in group Ⅰ, hydrogen (H), lithium (Li), sodium (Na) and rubidium (Rb) were placed together as they formed oxides with the same chemical formula. While group Ⅶ elements such as fluorine(F), chlorine(Cl), bromine(I) and iodine(I) were placed together as they form compounds with Hydrogen, i.e. hydrides with the same chemical formula. 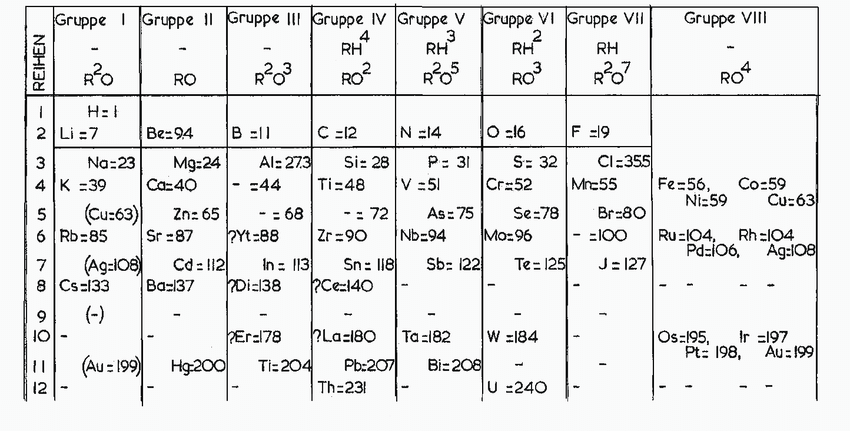 The main goal of Mendeleev was to group together elements in 'groups' by arranging them according to their atomic masses and properties. But the primary aim was to arrange in order of similar properties. He made gaps for elements that were undiscovered at that time and predicted their properties too. He had made a gap under the element aluminum and named it eka-aluminum, and the element under silicon was named eka-silicon. After several years, gallium was discovered, which took the place of eka-aluminum, and germanium took the place of eka-silicon. The interesting fact is that the properties predicted by Mendeleev were quite similar to the actual properties of elements: Gallium and Germanium.

The gaps that he had left were fitted exactly by the new elements that were discovered in the later years. Also, the new elements could be fitted in the periodic table proposed by Mendeleev without disturbing the place of existing elements.

1. What was the basis of Mendeleev's periodic table?

Elements were arranged together with similar properties and in order of increasing atomic masses.

2. Eka- aluminum, as predicted by Mendeleev turned out to be which element?

Gallium, which was discovered later, had properties similar to that predicted for Eka- aluminum.

3. What were the demerits of Mendeleev's periodic table?

He failed to assign the position of the hydrogen atom, and also, the isotopes which were discovered later couldn't fit in the periodic table.

We hope you enjoyed studying this lesson and learned something cool about Mendeleev's Periodic Table! Join our Discord community to get any questions you may have answered and to engage with other students just like you! Don't forget to download our app to experience our fun VR classrooms - we promise it makes studying much more fun! 😎.