Friction always opposes the motion of the object. The higher the coefficient of friction (μ), the greater is the friction between the two surfaces.

Let’s say you go on a hike with your friends over the weekend. On the way to the camping site, your group comes across a creek with lots of wet rocks, and you slip when you accidentally step on one. Later in the evening, it’s getting cold, and you rub your hands together to generate heat before your friend uses their flint and knife to start a campfire. What do you think is a common factor between all these events? No, it’s not you; it’s Friction! 😀 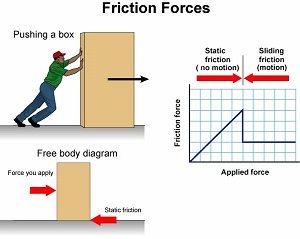 In simple terms, friction is a resistive force generated between two surfaces in contact when they move past each other. Elementary problems in physics textbooks often ignore friction in its calculations; however, friction is a dominating force in the real world. It helps you walk on the ground, and the lack of friction is why you slip on a wet floor.

Friction between two surfaces generates heat which is why you rub your hands together when you’re feeling cold. Friction can also generate heat that is intense enough to melt objects. 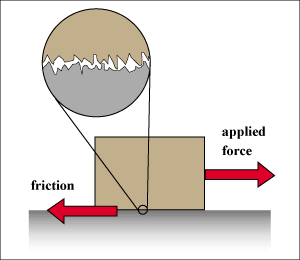 Mathematically the force of friction can be calculated as:

The normal force acting on a body that is on a flat surface will be the object's weight.

The major two types of friction are:

Static friction is the type of friction between surfaces while they are at rest with respect to each other. If you have ever tried pushing a heavy box across the floor, you would have observed that it takes some amount of force before the box starts sliding. This is the force from static friction.

This type of friction comes into play once the box starts sliding across the floor. You would also notice that static friction is greater than sliding friction. 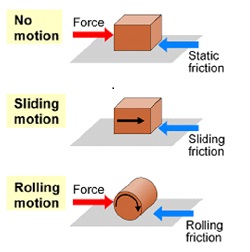 The two other types of friction are rolling friction and fluid friction.

1. What kind of force is friction?

Friction is a resistive force generated between two surfaces in contact when they move past each other.

2. How does friction affect our daily life?

We hope you enjoyed studying this lesson and learned something cool about Friction! Join our Discord community to get any questions you may have answered and to engage with other students just like you! We promise, it makes studying much more fun! 😎