The latest wave with high, small, or equal amplitude is created by combining waves.

Interference is a process in which two waves merge by adding their displacements at every point in space and time, resulting in a consequent wave of larger, lower, or equal amplitude.

When waves collide at the same time as touring throughout the identical medium, that is called wave interference. The medium takes on a form due to the internet impact of the 2 awesome waves at the medium’s debris because of wave interference.

There are two types of Wave interference –

Destructive interference occurs when two interference waves are displaced in opposite directions at any point along with the medium. 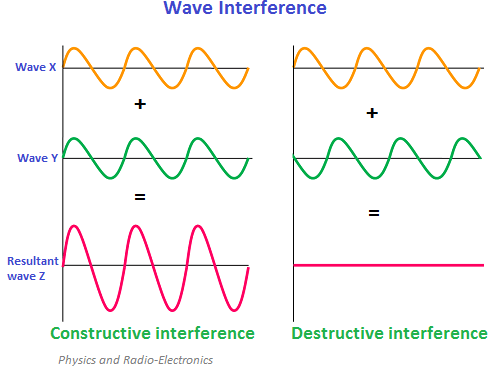 If two or more waves of the same type collide at the same point, the resulting amplitude at that point is equal to the vector sum of the amplitudes of the individual waves, according to the wave superposition principle.

APPLICATIONS OF INTERFERENCE OF WAVES IN REAL LIFE

Interference is a process in which two waves merge by adding their displacements at every point in space and time, resulting in a consequent wave of larger, lower, or equal amplitude.

Q. What are the types of interference?

There are two types of interference:

Q. State true or false: The interference of waves results in the medium taking shape resulting from the net effect of the two individual waves.

True, the medium takes shape as a result of the net influence of the two separate waves when waves collide.

Q. State the principle of superposition of waves?

According to the superposition principle, when two or more waves merge in space, the resulting disruption is equivalent to the algebraic total of the individual disturbances.

We hope you enjoyed studying this lesson and learned something cool about Wave Interference! Join our Discord community to get any questions you may have answered and to engage with other students just like you! We promise, it makes studying much more fun!😎