In particle physics, an elementary particle, also known as a fundamental particle, is a subatomic particle that has no other particles attached to it.

FUNDAMENTAL PARTICLES OF  AN ATOM AND MATTER

FUNDAMENTAL PARTICLES OF QUARKS AND LEPTONS

Quarks are small particles that live inside protons and neutrons and come in six different flavors: up, down, weird, charm, bottom, and top. Two up quarks and a down quark make up protons, while two downs and an up make up neutrons.

Leptons are classified as fundamental particles since they do not appear to be made up of smaller particles. Leptons can be neutral or carry one unit of electric charge. Electrons, muons, and taus are charged leptons. 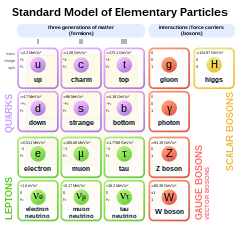 The universe around us is made up of two sorts of fundamental particles: matter particles and force particles, the photon, is responsible for electromagnetic radiation.

Because electrons, neutrinos, and muons are now included in the categorization, their properties must be half-integral. In contrast to the universal Fermi interaction, it is important to suppose that the neutrino is the source of the weak. Interaction of fermions in order to rule out certain undiscovered phenomena.

i. Electrons: Electrons are particles with a negative charge. They have a little mass.

ii. Protons: Protons are particles with a positive charge. It doesn't leave the nucleus.

iii. Neutrons: have no charge and a mass that is almost equivalent to that of a proton.

Q. What are the Fundamental Particles?

The smallest building components of the universe are fundamental particles (also known as elementary particles). Fundamental particles have no internal structure, which is a distinguishing feature. To put it another way, they don't include any additional materials.

Q. What are the 12  fundamental Particles in-universe?

Q. How many fundamental particles are there?

In the standard model, there are Six force particles that cause matter particles to interact. Gravitational, electromagnetic, strong, and weak forces are the four fundamental forces.

We hope you enjoyed studying this lesson and learned something cool about Fundamental Particles! Join our Discord community to get any questions you may have answered and to engage with other students just like you! We promise, it makes studying much more fun!😎