Projectiles are objects that primarily move under the influence of gravity. This article tells you about what determines their motion and path.

What is common between a bullet fired from a gun, a basketball shot from the end of a court, and a football kicked towards a goal? These objects are given an initial momentum to make it to a target. However, their path to the target is never straight. When shooting a basketball, you instinctively throw the ball higher while visualizing a curved path into the basket. Why the curve? Why can’t you send all these objects in a straight line to their targets? Let’s find out!

WHAT IS A PROJECTILE?

Any object thrown or shot into the air and continues to fall only under the influence of gravitational acceleration is known as a projectile.

Air resistance can significantly change the trajectory of a projectile; however, it is ignored in most introductory physics problems.

MOTION OF A PROJECTILE

It is important to divide its motion into vertical and horizontal components to analyze projectile motion. Consider a cannon shooting a ball at 20 m/s horizontally:

The moment the ball leaves the cannon, it begins to fall under the influence of gravity. The gravitational acceleration (g) increases the vertical component of velocity every second, as shown by the vector diagram in the figure. Under the absence of gravity, the ball would continue to fly horizontally in a straight line.

WHAT CREATES THE CURVE IN THE TRAJECTORY?

When studying projectile motion in two dimensions, it is essential to understand that the vertical and horizontal components of motion of the object don’t influence one another. Consider the cannon shown in the above figure. Under the influence of gravity, if you were to shoot a cannonball horizontally and drop a cannonball simultaneously from the same position, both the balls would hit the ground at the same time. 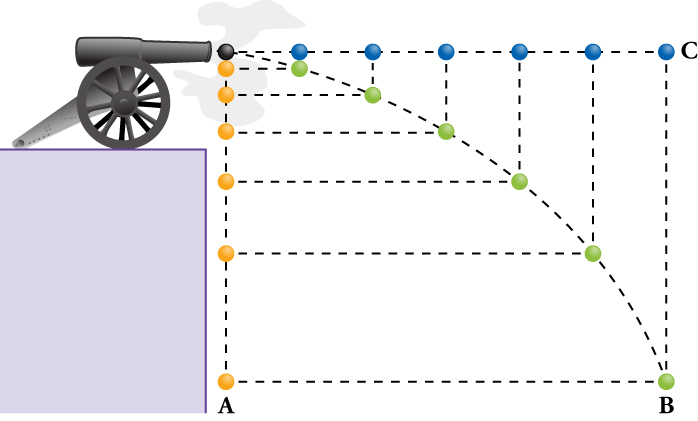 1. What are the three types of projectile motion?

The three types of projectile motion examples include:

2. What is projectile motion?

Projectile motion is the motion of an object solely under the influence of gravity. It includes the motion of all objects that are given an initial velocity and allowed to fall under gravity.

We hope you enjoyed studying this lesson and learned something cool about Projectile Motion! Join our Discord community to get any questions you may have answered and to engage with other students just like you! We promise, it makes studying much more fun! 😎