Solid, liquid, and gas are the three types of states of matter.

It's our duty to protect our environment, and metal recycling is one of the numerous ways we can contribute to the preservation of our lovely environment. Recycling metals decreases ore mining waste by 97%, according to statistics. But, how do you believe this occurs? It's simple: the recycled metal is collected and placed in a furnace, where it is melted into new metal sheets. These alterations are referred to in science as a change in the state of matter.

CHANGING OF THE STATE

PROCESSES INVOLVED IN THE CHANGE OF STATE

Melting, freezing, sublimation, deposition, condensation, and vaporization are the various processes that cause a change between various states. Below is the change in the state diagram. 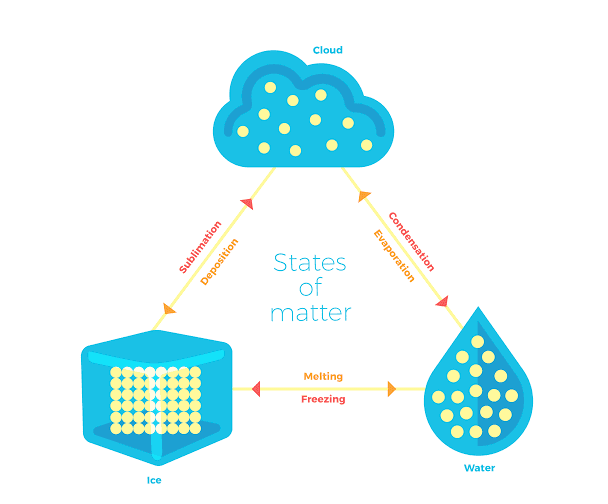 Q What is the boiling point?

The boiling point of a liquid is the temperature at which it boils and starts transforming into vapor.

Q. What is the melting point?

The melting point of a solid is the temperature at which it transforms into a liquid.

Q. What is the process in which solids directly transform into a gas?

Sublimation is the process of solids converting straight to gasses.

Q. What is evaporation?

Evaporation is the process of liquids turning into gas.

We hope you enjoyed studying this lesson and learned something cool about the Change of State! Join our Discord community to get any questions you may have answered and to engage with other students just like you! Don't forget to download our App to experience our fun VR classrooms - we promise, it makes studying much more fun!😎