The atomic radius is critical in describing an element's property and has a general trend in the periodic table.

Who doesn't enjoy strolling down a Walmart aisle, gazing into the cupboards brimming with their favorite snacks? The packs are already placed so that they cover the most surface area possible. The number of cereal boxes that can be placed in a cabinet is far less than the number of potato chips packets stored in the same space, which is even less than the number of chocolate bars stored in the same space. Knowing the dimensions of the objects we're interacting with can help us determine how much space is required. Even if the atoms are tiny, their radius can be estimated. Also, when attempting to describe the behavior of atoms or compounds, the size of atoms is critical. The atomic radius is one of the ways we can describe the size of atoms.

Technically, the atomic radius is the distance between the nucleus's center and the outermost electron-carrying shell where the electron cloud's density reaches its greatest. But, orbital limits are hazy and, in reality, vary depending on the circumstances. The distance between the nuclei of two similar atoms linked together is measured to standardize the measurement of atomic radii. Half of the length between the nuclei of the two similar atoms linked together is known as the atomic radius. In the periodic table, this measurement follows a typical pattern. 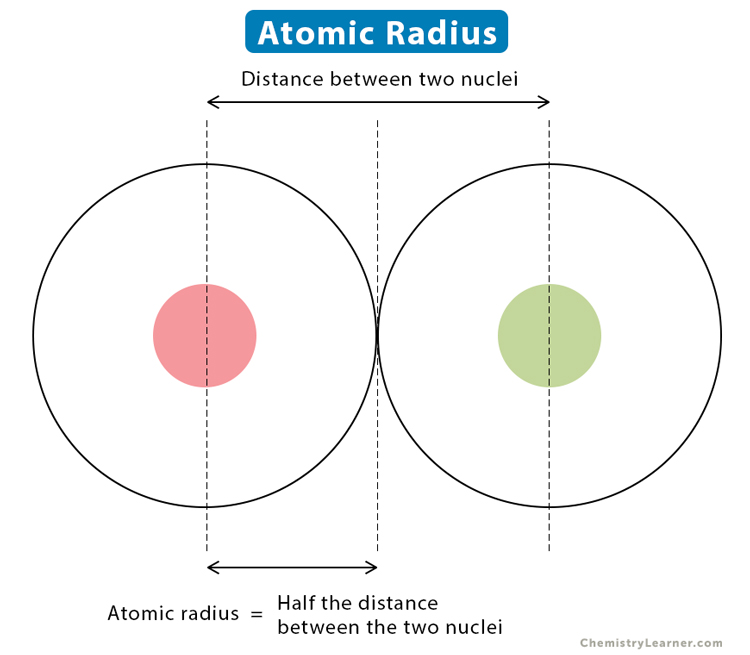 The covalent radius, abbreviated as Rcov, is a measurement of the radius of an atom in a covalent bond. Picometres or angstroms are the most common units of measurement.

The atomic radius in a periodic table varies as we move across or down the table. A molecule's atomic radius decreases over time. While the number of electrons keeps increasing, it only adds to the major energy level; hence the electron cloud doesn't enlarge. However, as time passes, the electrons are closer to the nucleus, which reduces the atomic radius.

Note: The atomic radius rapidly rises as we move from halogens to inert gases.

Atomic radii increase as you descend a group. This is because electrons in each group inhabit progressively higher energy levels. Atomic radii grow in lockstep with the size of electron clouds.

1. Why does the atomic radius decrease across a period?

2. What are the two trends in atomic radius?

The two trends in the atomic radius are:

We hope you enjoyed studying this lesson and learned something cool about the Atomic Radius! Join our Discord community to get any questions you may have answered and to engage with other students just like you! Don't forget to download our app to experience our fun VR classrooms - we promise it makes studying much more fun! 😎