🗻 Big Picture: If a population is in Hardy-Weinberg equilibrium, the frequencies of alleles (gene versions) and genotypes (allele sets) in that population will remain constant throughout generations.

The statement of Hardy Weinberg law is: "In the absence of any evolutionary influences from generation to generation, the genotype and allele frequencies in a large, random-mating population remain constant." In other words, the rule states that if the frequency of distinct alleles in a population is already known, it is feasible to predict the anticipated frequencies of genotypes in a population under a restricted set of assumptions.

The first Hardy-Weinberg equation estimates the frequency of certain alleles in a population. 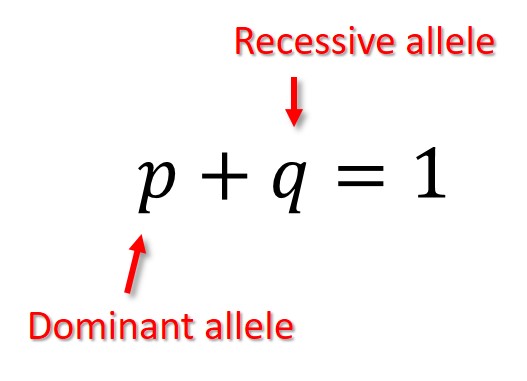 The second Hardy-Weinberg equation is used to determine genotype frequencies.

The following conclusions can be inferred through this law:

Differences between expected and actual results may arise if any assumptions are broken. The ramifications are completely dependent on the detour selected. 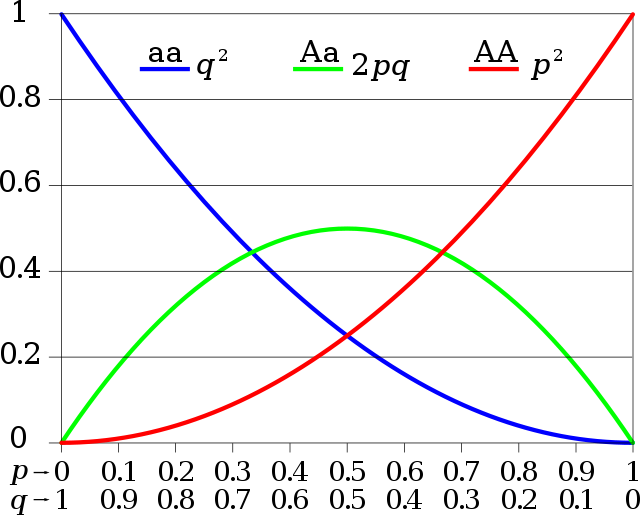 Mutation: Mutation has just a little effect on allele frequencies. The mutation rate is in the range of 10-4 to 10-8, and this is the most common order of allele frequency changes. Recurrent mutations will conserve the alleles even if there is still a strong selection against them in the population.

1. What are the five conditions of the Hardy-Weinberg principle?

2. What is the Hardy-Weinberg principle?

In the absence of disrupting events, the Hardy-Weinberg equilibrium states that genetic variation in a population will remain constant from generation to generation. Bringing new alleles into a population can upset the balance of allele frequencies.

3. What is meant by genetic equilibrium?

A variable version of a gene is known as an allele. Some genes exist in several distinct versions, all found on a chromosome at the same genetic locus. If there are two identical alleles at a locus, the genotype is homozygous, and if the two alleles differ, the genotype is heterozygous.

4. What are the 2 hardy Weinberg equations?

5. What is the difference between allele and genotype frequency?

The relative frequency of an allele on a genetic locus in a population is measured by allele or gene frequency. The proportion of a specific genotype among all individuals in a community is known as genotypic frequency.

6. What does the Hardy-Weinberg model show?

7. What idea did Hardy and Weinberg disprove?

8. What is the purpose of hardy Weinberg equilibrium?

Hardy-Weinberg Equilibrium (HWE) is a method for estimating the number of homozygous and heterozygous variant carriers in non-evolving populations based on allele frequency.

9. How do you know if Hardy-Weinberg is in equilibrium?

We hope you enjoyed studying this lesson and learned something cool about Hardy-Weinberg Equilibrium! Join our Discord community to get any questions you may have answered and to engage with other students just like you! Don't forget to download our App to experience our fun VR classrooms - we promise it makes studying much more fun! 😎