In 1678, Anton van Leeuwenhoek, a Dutch microscopist who co-discovered sperm, believed semen consists of parasitic material. He thought that sperm had nothing to do with reproduction of new life. But, with time and experiments, he understood that each sperm consists of an embryo.

Gametogenesis is derived from two Greek words, “gamete” and “genein.” “Gamete” means “wife”, “gamein” means “to marry” whereas “genein” means “to produce.” We are going to learn about gametogenesis and the various processes involved.

Gametogenesis is a biological process in which diploid and haploid precursor cells undergo cell division to form new organisms. They form mature haploid gametes by the meiotic division of diploid gametes. The male gametes, or as we refer to them as sperms, are produced by testes. The male reproductive organ consists of two round globular shaped sac-like structures located below the penis. The female gametes called ova or eggs are produced by ovaries. They are two oblong orange-like structures present on each side of the uterus, in the lower abdomen.

The primitive germ cells present in female and male reproductive organs initiate gametogenesis. The germ cell consists of 46 chromosomes, which hold the DNA or the genetic information, and this genetic information influences the body structure and intellect of the new organism.

The genetic code determines the sex of the organism. It also helps determine the height, eye color, hair type, etc. All this information is stored in chromatin fibers. Chromatin is a complex of DNA and protein. The genetic information is condensed in the nucleus of each cell by tightly coiled chromatin around proteinaceous scaffolds, which are known as histones. There are 23 pairs of chromosomes present in somatic cells — chromosomes 1 to 22 occur in duplicates, while the remaining two chromosomes are sex chromosomes X and Y. 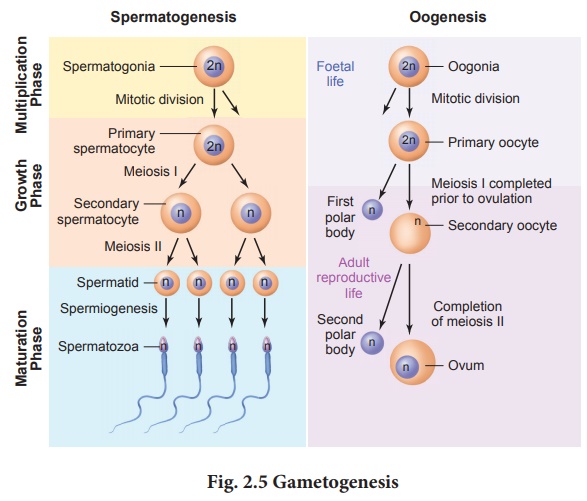 Gametogenesis in the human body

Gametogenesis consists of different phases in generating the new organism from the male and female gametes. Depending on the biological life cycle of the organism, gametogenesis occurs by meiotic division of diploid gametocytes into various gametes, or by mitosis.

Meiosis is the first cell division between four haploid cells and one diploid cell. It is different from other cell divisions like mitosis. Meiosis occurs in two distinctive phases: meiosis I and meiosis II.

It is the growth phase of the cell, where the DNA is present in heterochromatin or euchromatin. During the interphase, each chromosome is replicated to produce two identical copies, called sister chromatids, that are held together at the centromere by cohesin proteins. Interphase also represents the time of cellular growth where the cell duplicates in preparation for cell division. Hence, the parent cell is converted from diploid state to tetraploid state, i.e., having 92 chromosomes.

After completing the interphase, the cells enter the prophase I state. This phase consists of the alignment of homologous pairs of chromosomes and the exchange of DNA.

Prophase I can be further divided into the following sub-stages: 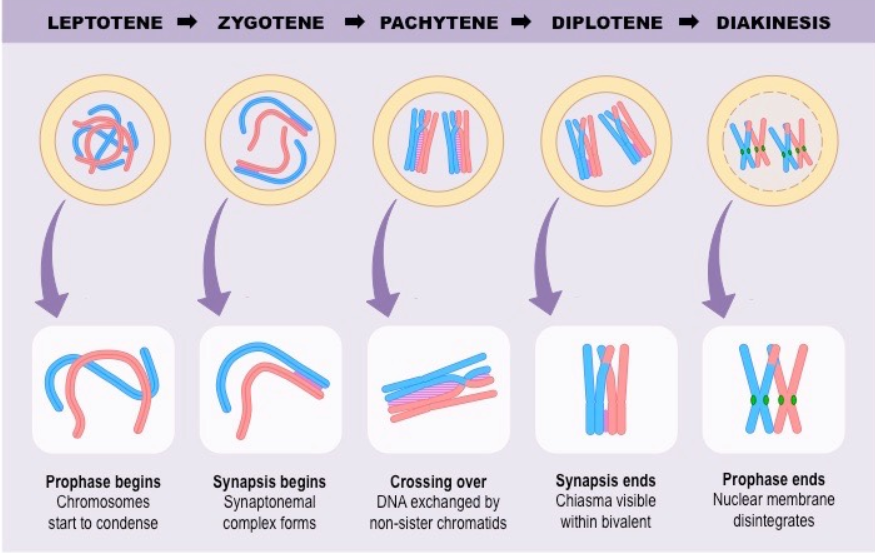 After the completion of prophase I (the completion of diakinesis), is the beginning of metaphase I. In this stage, the nuclear envelope is completely disintegrated, the spindle fibers from opposing centrosomes connect to bivalents and align them along the center of the cell.

Disjunction occurs, and the bivalents split. Homologous chromosomes move to opposite poles of the cell.

The nuclear membrane might reform, cytokinesis (cell division) occurs to form two haploid daughter cells. The two daughter cells will have genetically different chromosomes. This stage occurs differently in males and females. The cytoplasmic division is asymmetric in females. It produces larger oocytes whereas, in males, the spermatocytes hang on to the cytoplasmic bridge.

In meiosis, four gametes are formed from a single cell. Hence, after the completion of telophase I, meiosis II (the second round of cell division) occurs. Meiosis II resembles mitosis more than meiosis I as it is a simple division with no crossing over. No DNA replication occurs, and the number of chromosomes remains unchanged during meiosis II.

The process of gametogenesis shows us the different stages that occur when a parent cell divides and forms a new cell in the body. It gives a complete idea of the phases invloved in the formation of mature haploid gametes.

1. What is the process of gametogenesis?

The process of gametogenesis involves the production of gametes from haploid precursor cells. It is different in human and plant bodies, and it involves a lot of stages.

2. What is human gametogenesis?

The development of male and female germ cells in the human body, which is required to form an individual organism, is known as human gametogenesis.

3. What are the two types of gametogenesis?

Spermatogenesis and oogenesis are the two types of gametogenesis.

4. What is gametogenesis and oogenesis?

Gametogenesis is the formation of new organisms from the male and female germ cells. In contrast, oogenesis is the growth process of primary eggs or ova into mature ova in the female reproductive organs.

Homogametes are those gametes that resemble both anatomically and morphologically. They are very similar to each other.

6. What are meiocytes? Explain their role.

Meiocytes are specialized cells in diploid organisms that differentiates into a gamete through the process of meiosis. Through meiosis, the diploid meiocyte divides into four genetically different haploid gametes and thus help maintain the chromosome number.

We hope you enjoyed studying this lesson and learned something cool about Gametogenesis! Join our Discord community to get any questions you may have answered and to engage with other students just like you! Don't forget to download our App to experience our fun, VR classrooms - we promise, it makes studying much more fun! 😎