Genetic linkage is the process where two closely stacked genes are inherited together during meiosis.

Genes carry the trait information in an individual that determines the activity and physical features. Chromosomes are present within the nucleus of the cell in a condensed form, and they are made of DNA and proteins. There are only 23 pairs of chromosomes present in each cell. However, the number of genes present in 23 chromosomes is roughly 20000.

Linkage suggests that some traits seem to occur together. For example, brown eyes and black hair occur more frequently than black hair and blue eyes! Linked genes are said to occur on the same chromosome, and are known to be situated pretty close together on said chromosome.

Two genes could be very closely located. Now, the question arises that can such closely located genes affect the inheritance process? The answer is yes!

The genes that are closely stacked with each other are inherited in pairs more often than not. The inheritance of genes in pairs is known as a genetic link. Genetic linkage defies Mendel's Law of Independent Assortment. In this article, we'll learn more about genetic linkages.

What is genetic linkage?

We have discussed earlier that genes are densely located on each chromosome because a cell only has 46 chromosomes as opposed to 19000 genes present in two sets. Therefore, there is a good chance that the genes are stacked very close to each other.

Thus, all four combinations are possible in a double heterozygous organism. The genes on separate chromosomes assort independently because of the homologous pair that assort together. Homologous pairs of chromosomes are the ones that carry similar genes but have different receiving alleles for them.

One homologous chromosome is received from the mother and the father each. Genes that are far apart from the same chromosome assort independently due to homologous recombination.

Now, in a situation where genes are located close to each other on the same chromosome, the crossover still occurs. However, now the genes will be received as a unit by the allele, and the resulting gamete would be different. This is known as genetic linkage. 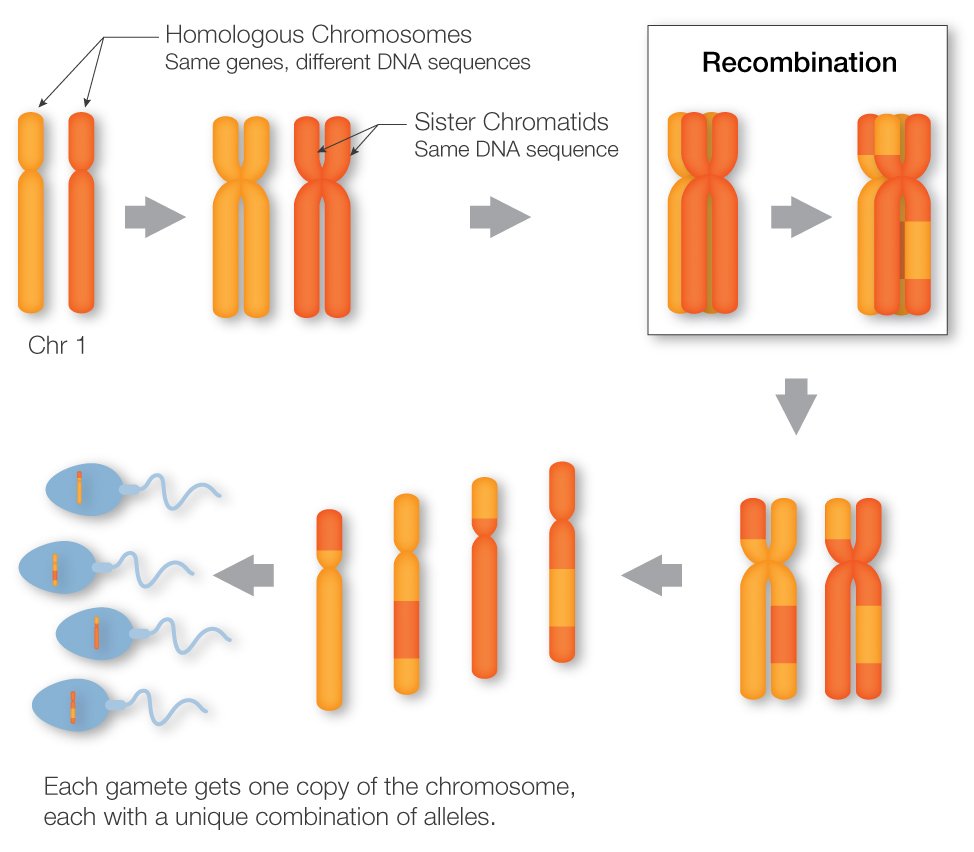 Homologous recombination is a process that leads to genetic diversity and improves the survival chances of a species. When the gametes are formed due to the fusion of egg cells and sperm cells, the chromosomes make a copy of themselves called sister chromatids.

For a while, the sister chromatids stay attached to the source. During the gamete formation, all the four copies line next to each other, and the DNA strand from the chromosomes breaks and rejoins. Although now, the alleles of the DNA have changed.

Lastly, the chromosomes divide, and the gamete receives one chromosome from each parent. The resulting chromosome has different alleles for the genes that are received.

Now, the catch here is that the breaking point of every chromosome is different. Therefore, the chromosome copy that the gamete receives can be a random copy of the recombined chromosome. Hence, the receiving alleles for the genes change that results in jumbling and shuffling, which can also be attributed to recombination frequency.

Researchers use genetic linkage to find the location of a particular gene on a chromosome. This is known as linkage mapping. This is done by observing the frequency of two genes being inherited together. Hence, a conclusive genetic map of distance can be created. It is a game of possibility from here on. 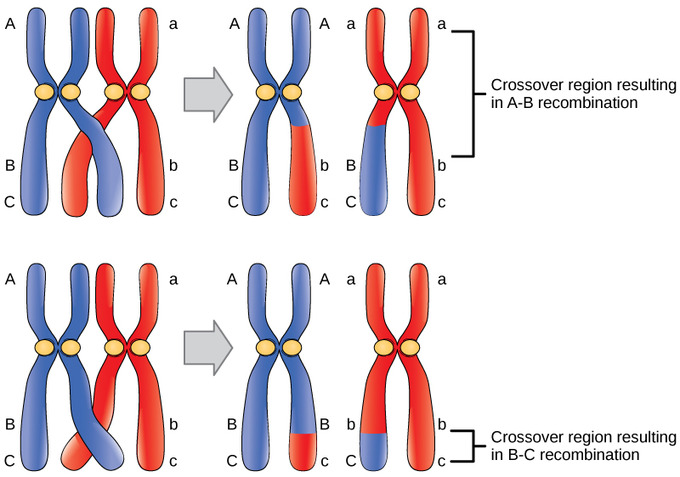 We know that each gamete can only get one of two combinations of recombined chromosomes. Therefore, the chance that two unlinked genes will be inherited together is one in two.

Now, unlinked genes are usually present on different chromosomes or at a fair distance from each other on the same chromosome. Therefore, they get separated easily by recombination.

On the other hand, what does the recombination frequency of 50% indicate? There is a good chance that they might be linked on the same chromosome. The distance between two genes is directly proportional to the frequency of linked inheritance. A genetic linkage map helps identify the mutation in an individual. By looking for linked genes, the location of the mutated gene can be easily traced.

1. In what process can gene linkage break?

During the process of recombination, linked genes can break. Recombination is a process when two homologous chromosomes align together in meiosis and exchange DNA information. However, the recombined chromosome has a different receiving allele for the same DNA, which leads to genetic diversity.

2. Why is it important to determine genetic linkage?

Genetic linkage leads to genetic mapping that helps in genetic disorder research. Scientists use the linkage map to determine whether the given phenotype disease is caused due to a mutation in one gene or several other genes.

3. Will linked genes always be inherited together?

Yes. The linked genes are always inherited together and are received as one unit by the receiving allele. Hence, the resulting gamete is different.

Yes. The DNA holds crucial genetic information. We know that chromosomes are nothing but DNA strands wrapped around proteins called histones. Histones help condense the DNA strands so they can fit inside the nucleus. Now, we have discussed earlier that 23 chromosomes have roughly 19,000 genes.

We hope you enjoyed studying this lesson and learned something cool about Genetic Linkage! Join our Discord community to get any questions you may have answered and to engage with other students just like you! Don't forget to download our App to experience our fun, VR classrooms - we promise, it makes studying much more fun! 😎