🗻 Big Picture: DNA is the genetic blueprint of the cell that carries all of the instructions necessary for an organism to grow, survive, and reproduce. RNA translates these instructions for all of the other organelles that keep a cell functioning, making it equally important to our ability to live and function. This study guide will cover what RNA is, its different subtypes, what makes it similar to DNA, and what sets it apart.

Let’s start with the basics. You’ve probably heard of DNA before (deoxyribonucleic acid). It carries our genetic code–the textbook from which all the information we need to grow, survive, and reproduce originates. DNA is found in the nucleus in the form of either chromatin or chromosomes. It’s composed of a sequence of nucleotides that link together into one long double-stranded molecule. The order of these nucleotide bases determines our genetic blueprint, kind of like how the order we put the letters of the alphabet in determines our words.

Thinking about DNA in terms of language is actually pretty useful. It has all of our genetic information written down in its own language, but unfortunately, the rest of the cell doesn’t speak it. Seems like a pretty big oversight in terms of communication (who even designed this thing?), but luckily, there’s another molecule in the mix who can help translate: ribonucleic acid, also known as RNA.

RNA and DNA are two of the three most important macromolecules necessary for life. The third one is proteins, which DNA and RNA work together to produce. In the simplest terms possible, DNA makes RNA, and RNA makes proteins. There are three types of RNA involved in protein synthesis: messenger RNA, transfer RNA, and ribosomal RNA. We’ll talk about what they do in a minute after we briefly touch on what makes DNA and RNA different, besides the first letter of their name (LOL) (so funny!) (aren’t we funny?) (tell us we’re funny).

How is DNA Different from RNA?

DNA and RNA are actually pretty similar in terms of both structure and function. They’re both nucleic acids made of nucleotides, and those nucleotides are almost the same, but not quite. DNA uses the bases Adenine (A), Cytosine (C), Guanine (G), and Thymine (T). RNA uses the first three, but instead of thymine it has Uracil (U).

Another distinction is that DNA is made of two strands, while RNA is only made of one. The main difference between them though is that the nucleotides that make up RNA are composed of a nucleobase, a ribose sugar, and a phosphate group, while DNA’s nucleotides are made of a nucleobase, a deoxyribose sugar, and a phosphate group. Other than that, they’re pretty similar, so let’s move on to the different types of RNA.

The Three Types of RNA

Before we got distracted by the last section, we were talking about how RNA has three different forms– messenger RNA, transfer RNA, ribosomal RNA. They each have a special function to help out with the process of protein synthesis, which we’ll briefly go over below. 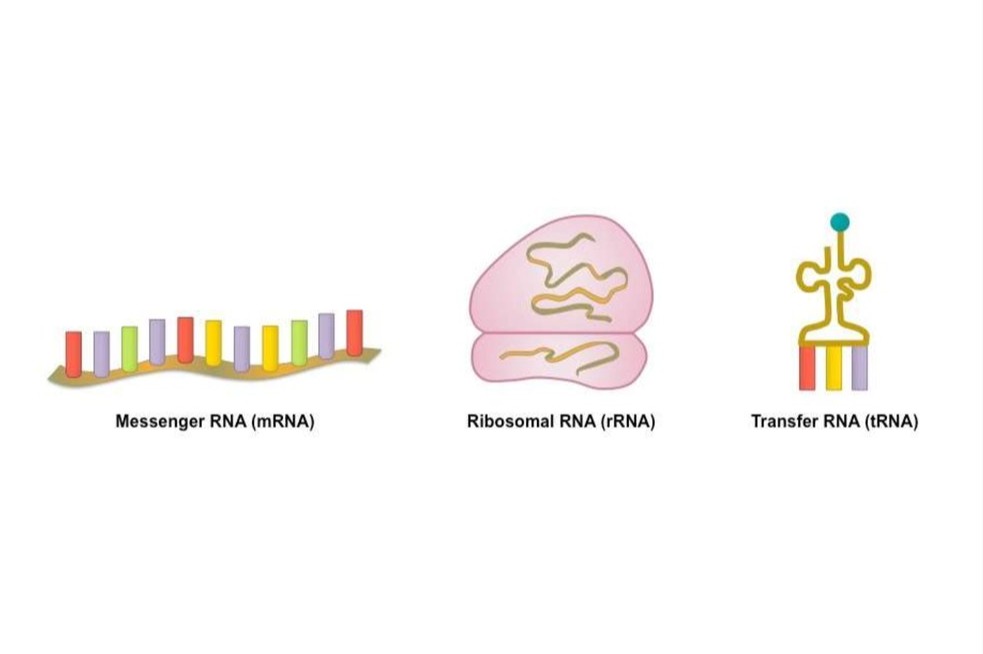 1. What is the purpose of tRNA?

Transfer RNA is responsible for delivering amino acids to the ribosome as it synthesizes a polypeptide chain.

2. What is the difference between DNA and RNA?

3. What is the purpose of rRNA?

Ribosomal RNA, along with proteins, make up the composition of ribosomes, the organelle respomsible for protein synthesis.

4. What is the purpose of mRNA?

DNA is translated into Messenger RNA, which is then transported from the nucleus to the cytoplasm where it delivers instructions to ribosomes for protein synthesis.

5. What do the two subunits of a ribosome do?

The small subunit uses mRNA to provide instructions to the large subunit, which is responsible for building polypeptide chains to synthesize proteins.

6. Why is DNA better genetic material as compared to RNA?

The deoxyribose sugar of the DNA is composed of one less oxygen-containing hydroxyl group. DNA is thus a more stable nucleic acid. RNA contains a ribose sugar, which is more reactive than DNA. Thus DNA is a better genetic material as compared to RNA.

We hope you enjoyed studying this lesson and learned something cool about RNA! Join our Discord community to get any questions you may have answered and to engage with other students just like you! Don't forget to download our App and check out our awesome VR room for this guide - we promise, it makes studying much more fun 😎