movement of the hands of a clock

A simple harmonic motion (SHM) is a special type of oscillatory motion. In this chapter, we look into what SHM is and how it differs from other types of motion. We see oscillatory and periodic motion all around us. A swing in the park moves to and fro; the hands of a clock go around every day; the strings on a guitar vibrate to produce sounds. Yet, all of these motions share commonalities and differences.

Before getting to SHM, it is important to understand oscillatory and periodic motion. 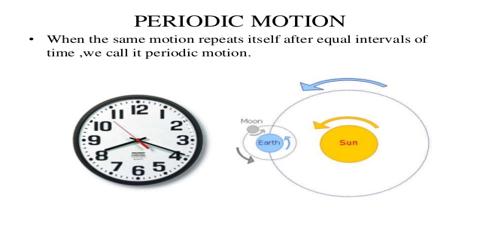 K is the spring constant measured in N/m

X is the displacement of the mean position

Q. What is unique about simple harmonic motion?

An SHM is a special type of oscillatory motion that is also periodic. The restoring force in an SHM is directly proportional to the displacement of the object from the mean position.

Q. What change can be made to increase the period of the oscillation if spring is attached to a mass and oscillates freely in simple harmonic motion?

Considering the characteristics of simple harmonic motion, to increase the period of oscillation, the spring stiffness needs to be reduced, and the mass needs to be increased.

Q. What is the importance of simple harmonic motion?

Simple harmonic motion finds application in all fields, starting from the design of circuits to the study of gravitational waves.

Q. What is the maximum displacement of a body in simple harmonic motion?

The maximum displacement of a body in SHM is called its amplitude.

We hope you enjoyed studying this lesson and learned something cool about Simple Harmonic Motion! Join our Discord community to get any questions you may have answered and to engage with other students just like you! We promise, it makes studying much more fun!😎