Natural selection is the last factor in evolution. This is the evolutionary process first described by Charles Darwin, and it is the image that most people associate with evolution.

Natural selection is a process in which an organism adapts to its surroundings by preferentially reproducing changes in its genotype or genetic composition. It is a key idea in evolutionary theory. It is frequently referred to as the survival of the fittest, and Charles Darwin and Alfred Russel Wallace proposed it. Darwin chose the name as a metaphor for artificial selection (selective breeding).

Natural selection explains why living creatures evolve to have the architecture, functions, and behaviors over time. This is how it works:

The evolution of antibiotic resistance in bacteria is a well-known example of natural selection at the action. Antibiotics have been used to treat bacterial infections since Alexander Fleming discovered penicillin in 1928. As a result of mutations, natural populations of bacteria include significant variation in their genetic makeup among their large numbers of individual individuals. Most bacteria die fast when exposed to antibiotics, but others contain changes that make them somewhat less vulnerable. These microbes will survive medication if only exposed to antibiotics for a brief time. Natural selection may be seen in removing individuals who have no resistance. A colony of antibiotic-resistant microbes will evolve given sufficient time and frequent exposure to the antibiotic. This results in an evolutionary arms race, often known as co-evolution, wherein bacteria produce strains less vulnerable to antibiotics while medical researchers discover new drugs that can kill them. Different, stronger antibiotics are routinely used in response efforts; nevertheless, new strains of MRSA have recently arisen that are immune to even these medications. Pesticide resistance in plants and insects and malarial quinine resistance are related situations. 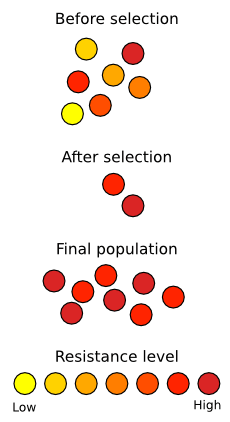 Another instance: Certain innocuous insects can be mistaken for harmful or foul-tasting insects. Mimicry evolves as a result of the best mimics surviving longer. They live longer to have more progeny than the less talented mimics. In the species, the genes of the better mimics grow more frequently. Mimic organisms become closer to their models over time. This is the method of evolution through natural selection.

1. How do you explain natural selection?

Natural selection is the adaptation and modification of populations of living organisms. Individuals in a population are inherently varied, which means they differ in certain respects. Because of this variety, some people have more suited to their surroundings than others.

2. What are the three types of natural selection?

3. What are the five main principles of natural selection?

Natural selection is a basic mechanism that affects the evolution of populations of living organisms through time. It's so simple that it can be broken down into five simple processes, abbreviated as VISTA: Variation, Inheritance, Selection, Time, and Adaptation.

4. What are the 4 components of natural selection examples?

5. How do you explain natural selection?

Natural selection occurs when organisms best suited to their environment survive and pass on their genetic features to succeeding generations in increasing numbers. Simultaneously, less suited species fail to live or reproduce faster and are pushed out of the ecosystem.

6. What are some key facts about natural selection?

We hope you enjoyed studying this lesson and learned something cool about Introduction to Natural Selection! Join our Discord community to get any questions you may have answered and to engage with other students just like you! Don't forget to download our App to experience our fun, VR classrooms - we promise, it makes studying much more fun! 😎