Mollusca classes are invertebrates belonging to the phylum Mollusca in the animal kingdom and are typically partially or fully covered with a hard, outer, calcareous shell.

Mollusks are invertebrate animals with typical mollusk characteristics like a soft body, a mantle, and a shell. There are about 100,000 species of mollusks, and they are usually found in fresh and marine water. Their body comprises a head, a muscular foot, a mantle, and visceral mass. They normally have a cavity, and the head typically has compound eyes and tentacles. 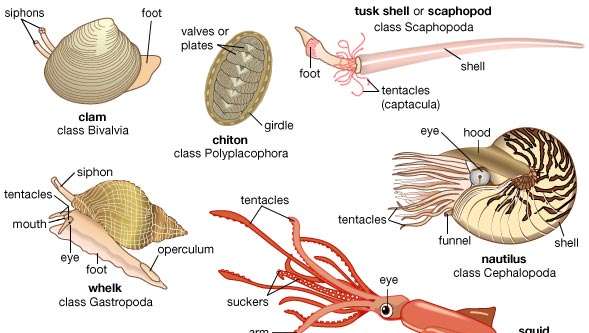 Aplacophora consists of solenogastres or the subclass Neomeniomorpha. They are small and cylindrical, worm-like, without a shell, and five centimeters long.

They include mollusk examples like mussels, oysters, clams, and scallops. They typically have a hard shell to protect them from predators. The shell is hinged and can be opened up. They suck in water with the help of siphons, absorb the food, and discard it. They also absorb oxygen from the same water.

They have a central cavity which has a heart that calculates blood. Burrowers and clingers like mussels live in turbulent waters as they possess hair-like structures called byssus, which enables them to hold and cling onto rocks. Cockles and razor wheels thrive in sand and burrow inside it at low tide or preyed upon. They eject a muscular foot inside the soft sand, spread it wide, and tug down.

They include the squids and octopuses, which are excellent hunters with big eyes and brains. The word cephalopod in Latin means' head and foot'. A single mass possesses ahead with attached feet or tentacles. They can change and camouflage themselves to be hidden from predators.

They have chromophores or skin cells that can move around different-colored pigments at high speeds. They also have light-reflecting chemicals, which may enhance or dull the colors. They have a bioluminescence-producing hormone called 'luciferin,' which, combined with oxygen, produces light, giving these organisms the ability to glow in the ocean's darkness.

Octopuses possess strong suckers on their arms which helps them prey and attach themselves. They use special muscular tubes called siphons to propel themselves and swim in the water. The presence of a central brain close to the eyes and individual brains in all the other tentacles makes the octopus a smart predator and quick learner with long memories. Octopuses are often poisonous and kill their prey by plunging their beaks into them and spraying venom.

They include snails and slugs. They are normally found on land, but sea snails, conches, periwinkles, whelks, abalones, and limpets are found in the sea.

They normally possess a single plate shaped like a cap and live at the bottom of the sea. Their head does not have eyes and tentacles. Examples include Neoloricata and Lepidopleurina.

They have a dorsoventral body that is flat and bilaterally symmetrical. They have eight plates in the shell, which are longitudinal and overlapped. They are chitons that resemble snails but have an eight-part shell.

Scaphopoda or the tusk shell or tooth shells have bodies covered with a shell enclosing the mantle cavity. 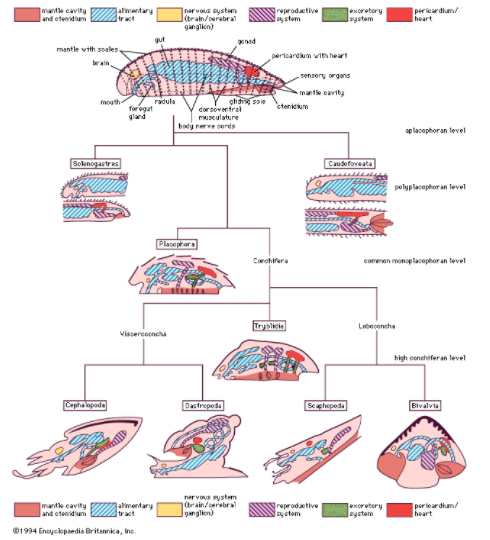 Hermaphroditism is also seen in some species. Mollusks reproduce where eggs get fertilized with sperm from a male penis. Capsules containing sperms called spermatophores are transferred with an arm. Parthenogenesis or reproduction through unfertilized gametes is also found in some gastropods.

Importance of mollusks to humans

Many mollusks like gastropods, bivalves, and cephalopods serve as food sources for humans. Some have important commercial purposes. Pearl bearing mollusks are used in the ornamental industry.

Chitons are found at the bottom of the intertidal zone and feed on algae from the surfaces of rocks. The scaphopods live in sandy mud and feed on smaller mollusks or crustaceans, which they capture with the help of the captacula. Cephalopods can move to depths of more than 5000 meters and feed on fish and crustaceans. Gastropods may be found up to ten thousand meters below in the oceans, and they may be predatory or parasitic. Some snails are found even in hot springs. Some bivalves, such as littoral Tridacna, have a symbiotic association with a group of algae called zooxanthellae.

1. What kind of animals are mollusks?

Mollusks are invertebrate animals that belong to the phylum Mollusca as they do not possess a spinal cord.

2. What are the six mollusks?

3. What are the three main mollusks?

The three main groups of mollusks are bivalves, gastropods, and cephalopods.

4. What are the four major mollusks?

They are gastropods, bivalves, cephalopods, and scaphopods.

5. What are the five main classes of Mollusca?

6. What structures do all mollusks have in common?

Most mollusks have a muscular foot that is used to creep along any surface or burrow. They also have a head with some sense organs and a mantle that covers them up. The radula of a tongue-like structure helps them in feeding and preying.

7. What are the characteristics of Mollusca?

The mollusk body has a cavity divided into parts like a head, muscular foot, visceral mass, and mantle. They are usually covered with a calcareous shell. They have a complete digestive system, a coelom, and special organs for excreting wastes.

We hope you enjoyed studying this lesson and learned something cool about Mollusks! Join our Discord community to get any questions you may have answered and to engage with other students just like you! Don't forget to download our App and check out our awesome VR room for this guide - we promise it makes studying much more fun 😎